The 'socio-economic duty' is already in law - it just needs to be enacted. There's no time to waste, write Just Fair's Dr Koldo Casla and Imogen Richmond-Bishop. 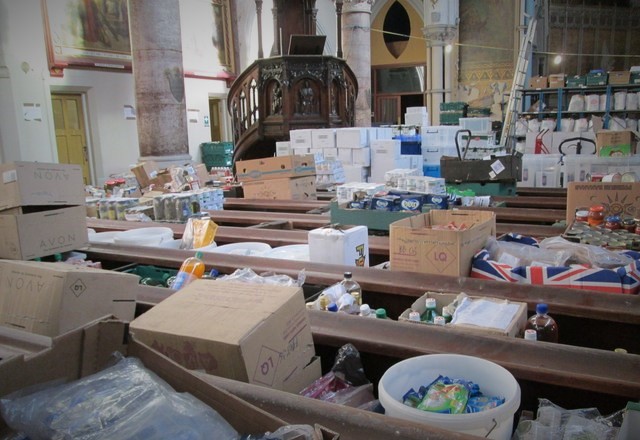 Pic: A foodbank near Bradford.

The spotlight is on poverty in the UK. The UN’s Special Rapporteur on Extreme Poverty and Human Rights, Philip Alston, is currently on an official visit here.

And the Plenary of the National Assembly for Wales is currently debating a key report on equality and Brexit.

In the joint report, two committees are recommending the Welsh government bring the so-called ‘socio-economic duty’ to life.

Established in Section 1 of the Equality Act 2010, the socio-economic duty (when activated) requires public authorities to actively consider the effects that their policies may have on increasing inequalities both nationally and locally.

Even though it has been in the statute book for more than eight years, the UK government has not triggered the duty yet. But Section 45 of the Wales Act 2017 empowers the government to bring it to life in Wales. Similar powers were bestowed on Scotland, where the duty is in force since last April via the ‘Fairer Scotland Duty’.

Research by Just Fair earlier this year identified 13 good practices by seven local authorities in England that were inspired by the socio-economic duty.

That is how we know that bringing the duty into effect would give local authorities a powerful lever to address socio-economic inequalities.

When implemented, the socio-economic duty requires councils, ministers and statutory bodies to be more transparent. Authorities have to demonstrate how they have taken into account the way their budgets and other decisions of strategic importance can affect material inequalities. The whole point is to give back control to citizens so they can hold public authorities to account.

There is abundant evidence that shows that inequality is bad for society as a whole. It harms physical and mental health, self-esteem, happiness, sense of trust and civic participation, and it restricts the resources available to support public services.

This is of the highest importance in Britain – one of the most unequal countries in Europe in terms of income and wealth but also in terms of regional disparities.

But the damage of inequality is particularly tangible in Wales. The Equality and Human Rights Commission recently updated its Is Wales Fairer? report.

It shows that reductions made to in-work and out-of-work benefits have hit particularly hard in Wales, where more people rely on welfare than in England and Scotland. The cuts have pushed many women, disabled people and ethnic minorities into poverty.

Despite lowering unemployment levels, work no longer guarantees an adequate standard of living for everyone. And educational attainment is still too closely correlated with the socio-economic background, which makes social mobility a hollow promise for too many families.

Adults living in most deprived neighbourhoods and towns have a lower life expectancy than those in wealthier areas, with a nine-year difference for men and seven for women.

Evidently, these expressions of inequality are not simply the fault of Welsh authorities. Inequality and the relative poverty it creates are the result of a multitude of political decisions made in London and Brussels…but also in national Assemblies and your local town hall as well.

Inequality is also the by-product of the economic system we live in, from which a few benefit significantly more than most. But one thing is to admit that inequality responds to complex causal links, and quite another is to pretend the government and local authorities should not do something about it.

They can and must address the inequalities that derive from socio-economic disadvantages even if they are not directly responsible for the existence of those disadvantages.

The UN Committee on Economic, Social and Cultural Rights, the UN Special Rapporteur on Racism, the Equality and Human Rights Commission, 79 MPs of five different parties, and more than 70 civil society groups are calling on the UK and the Wales governments to show their commitment to equal opportunities by supporting the socio-economic duty.

By triggering this part of the Equality Act, Wales would join Scotland in setting an example for public authorities in England, and beyond.

The duty is a unique feature of the legal system in these islands. It simply does not exist anywhere else. By activating it, Wales and Britain as a whole can set an international example.

It is time to show that, in or out of the European Union, we will not leave anyone behind.