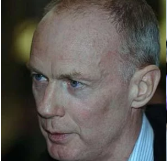 According to the Times, Wood has been compared to Keyser Soze, the Usual Suspects villian played by Kevin Spacey.

A 2008 Times article said: “Known for his love of a scrap, Mr Wood goes by the nickname of Keyser Soze, the terrifying and mysterious crime lord”.

Wood told the Times the nickname was unfair because “it couldn’t be further from the truth”.

Wood was also once called a “hard and calculating man” by a judge and a Telegraph journalist who met him said he thought he was “someone who thought that using vulgar language in elegant surroundings made him seem like a tough guy”.

After Cameron stepped down after losing the referendum, Brexiteer Boris Johnson ran to be his successor as Prime Minister but his campaign was ruined when fellow Leaver and friend Michael Gove decided to run for the leadership himself rather than support Johnson.

In an attempt to create unity, Theresa May appointed Johnson Foreign Secretary but in July 2018, Johnson resigned over May’s Brexit plan and now publishes a series of high-profile, well-paid columns in the Telegraph – which are widely seen as his pitches for the leadership of the Conservative Party.

A £50,000 donation from Vote Leave’s second-biggest funder will cement his position as the hard Brexiteer challenger for the job of Prime Minister and increase the perception that the Conservative Party is funded by the wealthy and the finance sector.

Boris Johnson did not immediately reply to a request for comment, nor did Pro Founders Capital – the company in which Jon Wood is an investment partner.