One motion proposes adopting the IHRA definition of antisemitism - while another urges the party to reject it entirely. 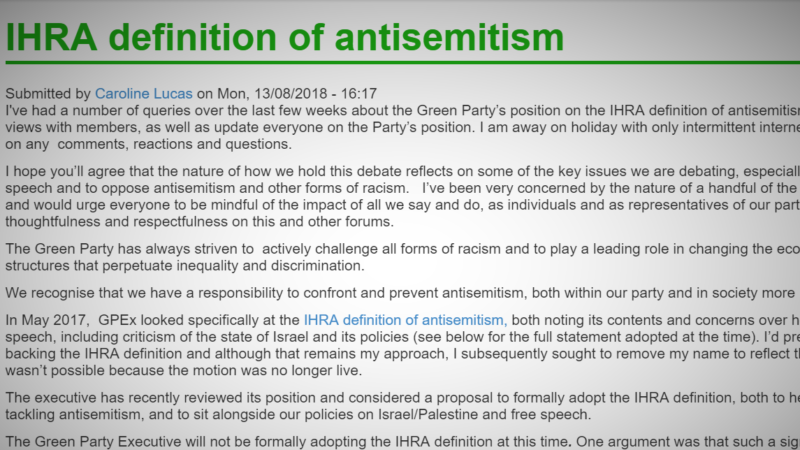 The Green Party of England & Wales’ Autumn conference next month is set to debate whether to adopt the International Holocaust Remembrance Association’s definition of antisemitism.

It follows the Campaign Against Antisemitism criticising then-leadership candidate Shahrar Ali last month, for what the organisation deemed an ‘offensive rant’ during a resurfaced Gaza demonstration speech made in 2009.

The story was covered by Left Foot Forward, with the speech appearing to link Israel’s actions to the Holocaust – which would constitute antisemitism under the IHRA definition.

A row subsequently broke out, with some Green Party members alleging there was a ‘witch hunt’ against anti-Israel/pro-Palestine activists in the party.

Left Foot Forward understands that complaints were made about further alleged antisemitic comments written by members in the wake of the story:

Some more #antisemitism lowlights in the current debate on my LFF story – calling Hitler a Zionist (sounds familiar), saying ‘they’ at @antisemitism back ‘ethnic cleansing’ and of course, ‘the Zionist propaganda machine’ pic.twitter.com/sJeJsmaHgw

At the time the Green Party said: “we believe it is absolutely critical that we discuss [the issue] openly and quickly, and we are doing so. We have reached out to the Campaign Against Antisemitism to ensure we fully understand their concerns and to respond accordingly.”

One Jewish member told this site that some of the comments on members forums made “frightening reading and is not something I ever thought would come from members of the Green Party” – but was concerned that no action appeared to have been taken yet.

In a statement to members on the 13th of August, Caroline Lucas said the party executive had decided not to adopt the definition, noting: “One argument was that such a significant decision ought to be taken by the wider membership and in close partnership with our Jewish members in particular.”

Lucas said her personal view was that she was minded to adopt the IHRA definition:

“My personal position was, on balance, to support adoption because I think the definition provides an instructive framework that can help with the vital work of education, understanding and campaigning. The legitimate concerns about free speech can be powerfully addressed by our continuing as a Party to champion that right and the rights of the Palestinian people to peace, freedom and justice. The definition and associated guidelines explicitly allow for this and make clear that criticising Israel or its policies, for example, is only antisemitic if it’s deliberately manifesting or inciting hatred…

“The IHRA definition isn’t perfect but it’s a working definition and I’m encouraged by initiatives to improve upon it. The Home Affairs Select Committee’s proposed amendments are very helpful in this respect. I am also mindful that letting the perfect be the enemy of the good is distracting from the actions all political parties need to take to show real leadership on tackling antisemitism.

“In the meantime, we will draw where helpful on the IHRA definition and other guidance…I also urge members to be mindful of the impact of their words and behaviour as we continue to debate this important issue as a party.”

Now, two opposing motions are being proposed to the party’s conference in October – one calling for the party to adopt the IHRA definition, and one vociferously opposing it.

Young Green Nate Higgins is proposing a formal definition of antisemitism as part of the party’s code of conduct, “to combat the rising antisemitic sentiment in society and our political discourse.”

The motion adds a formal definition of antisemitism to our members code of conduct, based on the IHRA definition but incorporating the Home Affairs select committee clarifications, which seek to ensure free speech is protected. The full motion is available here.

It has received the backing of over 70 members – more than the 50 needed to be debated. Because it is a ‘late’ motion, members will be able to amend it from the floor.

In a video about the motion, Green Party member Nate Higgins said:

“Right now we are letting down Jewish members and supporters who want and need the Green Party to be the party standing up against antisemitism.

“We have the opportunity now to solve this, and finally reach a decision on this topic.”

The motion, titled: “Campaign against adoption of the IHRA definition of antisemitism with its examples and Reaffirming GPEW position on BDS” states:

“Greens are at the heart of building a movement against racism and fascism, and there is no place for antisemitism, Islamophobia or any other kind of racism in our Party. At a time when the far-right is growing in confidence it is more important than ever to stand against Holocaust denial, anti-Jewish conspiracy theories and any other forms of antisemitic prejudice and hatred.

“However, the examples which accompany the IHRA definition systematically conflate opposition to Israeli policies with antisemitism, threatening to undermine many years of practical solidarity with the Palestinian people, that now includes Boycott, Divestment and Sanctions (BDS), in the face of decades of dispossession and occupation.”

If adopted, it would mean the party would continue to have no definition of antisemitism.

In May 2017 the Green Party Executive ‘noted’ the IHRA definition – but did not officially adopt it:

“GPEx is committed to taking action against antisemitism and notes the IHRA working definition of antisemitism and article 10 of the European Convention on Human Rights on the right to freedom of expression.

“Further notes the Tomlinson legal opinion of the IHRA definition, particularly that conduct identified by the IHRA to illustrate antisemitism is only anti-Semitic if it manifests hatred towards Jews.

“GPEx will work across the Green Party to advance understanding of and protect against antisemitism, drawing where helpful on the IHRA definition, at the same time as protecting freedom of speech and promoting Green Party policy on Israel and Palestine.

“GPEx will continue to actively monitor the Party’s practices and procedures for responding to allegations of anti-semitism. It will also be mindful of initiatives to develop alternative definitions of antisemitism and regularly review whether they can play a positive role in the Party’s work to tackle anti-semitism.”

After Left Foot Forward raised the alleged antisemitic comments made on the largest unofficial Green Party members Facebook group, ‘Support the Green Party for a Better Future’, a spokesperson for the party told this site:

“We have recently received 2 formal complaints about comments made on an unofficial Green Party supporters social media page. These are being processed in line with our usual complaints handling process, which aims to resolve all complaints fairly and quickly.

“The forum on which these comments were made carries the Green Party name but is not set up, endorsed, or monitored by the Green Party and its content does not necessarily reflect party policy or views – but there is no place in our party for antisemitism, Islamophobia or racism of any kind…

“We encourage people both inside and outside the Green Party to raise concerns about racism or prejudice, and will be providing antisemitism awareness training alongside a wide range of other workshops at our Autumn Conference this October.”

One Response to “EXCLUSIVE: Green Party conference set to vote on IHRA definition of antisemitism”