Two major developments in our health service could open it up to private takeovers. They must be stopped. 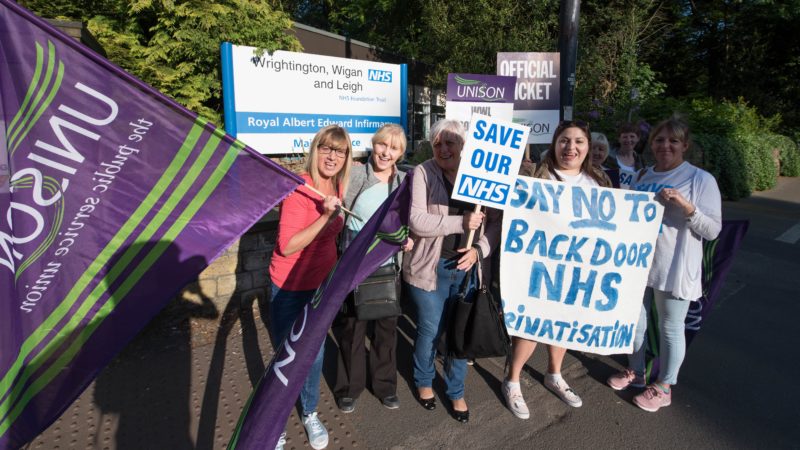 This week NHS staff are striking at Wrightington, Wigan and Leigh NHS Foundation Trust, as the organisation continues its efforts transfer hundreds of NHS staff into the private sector.

Since 2014 there has been a huge increase in NHS Trusts setting up subsidiaries across England as a result of increased pressure from spending cuts.

NHS Trusts argue subsidiaries allow them to save money on VAT. But as UNISON – which is leading the strike action – has pointed out, this just results in money being moved around the system and remaining unaccountable. They have also argued transferred staff will enjoy the same pay, working conditions and pensions they currently have under the NHS.

But this has been contradicted by other Trusts who claim transferred staff shouldn’t expect their conditions or pay to match future gains in the NHS. It also doesn’t take a genius to realise that if these rights and conditions are going to be “maintained”, future “savings” will be dependent on hiring new staff who will be paid less and have less rights.

Arguably, the biggest threat these subsidiaries pose is that they won’t be exempt from future takeovers by private companies. They pose a real risk to further fragmenting the NHS by acting as a backdoor to greater private sector involvement in the running of key NHS services.

But as awareness of the rise of subsidiaries and their dangers grows, it also appears that some have forgotten – or aren’t aware – of a bigger threat facing the NHS, of which subsidiaries are just the tip of the iceberg. These are “Accountable Care Organisations.”

Today JR4NHS, previously led by Professor Stephen Hawking, are taking Jeremy Hunt and NHS England to court over its plans to roll out ACOs across England.

If you don’t know, ACOs are American-styled systems of delivering healthcare. They are essentially corporate entities which can consist of an unlimited number of private companies working with NHS bodies to provide front-line services for a period of up to 10-15 years.

They will cover entire regions and cities of England. And there has been no vote in Parliament giving the Government permission to role these out across England.

The head of NHS England, Simon Stevens – someone whose arguments back the privatisation of the NHS and worked for an American company that manages ACOs – and Jeremy Hunt, have made clear they are “working around” legislation.

They pose an existential threat to the NHS as we know it.

They are designed to increase competition for patients and pose a serious risk of exacerbating geographic health inequalities, and as the government is pushing through £20bn in “efficiency savings” by 2020, they have been allowed to turn to private insurers for “help”, should they run into funding difficulties preventing them from delivering services.

You can bet they will. Real terms funding for the NHS has been decimated since the Tories took power and demand is on the rise.

JR4NHS are fighting this brazen attempt at the privatisation of the NHS by arguing these plans amount to an attempt to hand over the power of long-term health planning and resource allocation to private capital.

I urge you to lend them your support. Spread the word on ACOs, and march on the 30th of June with the National Health Action Party, the Peoples Assembly and the wider labour movement to tell the Tories to keep their hands off our NHS.

One way or another, even if JR4NHS wins today, you can be sure the Tories won’t stop in their quest to privatise our NHS.

Kane Shaw is a spokesperson for the National Health Action Party.