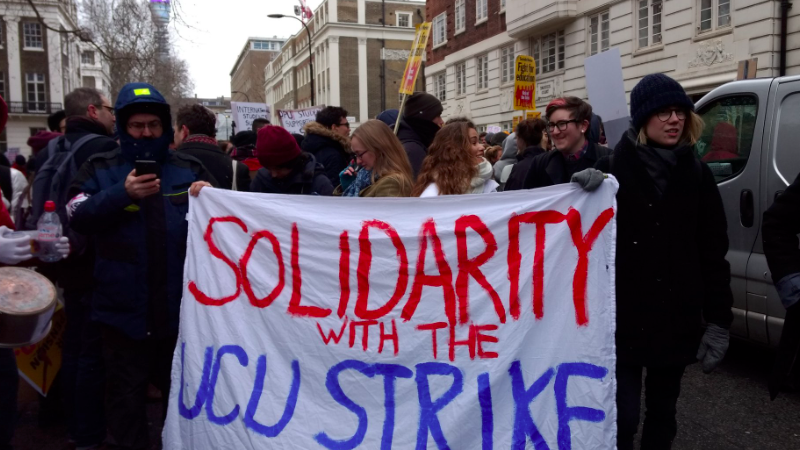 Students at nine institutions across the UK are staging sit-ins as the lecturers’ pensions strike enters its third week, in what a campaign group claims is the largest university protests in five years.

At UCL, fifty students staged a sit-down protest in the corridor outside the vice-chancellor Michael Arthur’s office last Monday and have stayed put since, pledging to remain until he publicly backs the strikes.

And yesterday 20 students at Bristol University also began occupying the area around management offices alongside activists at Leicester, Bath and Exeter, the latter of which occupied the vice-chancellor’s office itself.

A YouGov poll last month which showed 61% of students supported the strikes – these occupations are further proof that students are backing their staff in the dispute.

“Lecturers facing pension losses to the tune of £10,000 a year are right to strike, and it’s heartening to see so many students refusing to cross the picket line and undermine their staff.

“Our staff deserve dignity and fair treatment, not poverty in retirement – we are taking action to force our absurdly overpaid vice-chancellor to accept that.”

University and College Union (UCU) claims the change proposed by Universities UK (UUK), from a pension system of guaranteed retirement income to one in which income depends on its investment performance, will cost staff £200,000 each over the course of their retirement.

“The support from students during the pension strikes has been phenomenal. Students’ presence on the picket lines and support elsewhere throughout the past couple of weeks has made such a difference both to the staff and to the dispute.

“Universities have employed all sorts of tactics to try and break the strike and divide staff and students. The one thing they have in common is that none of them worked.”

“Extortionate tuition fees, arbitrary market-driven metrics for teaching and research and attacks on workers and their pensions are all part of the same corrosive neoliberal agenda.

“Students and staff are united in fighting for an ideal: that education is a public good far richer and more meaningful than what can be crudely measured in ‘efficiency’ and profitability.”