Immigration detention is inhumane, expensive and pointless. It compounds the trauma of the already traumatised. There is no place for it in today’s Britain. 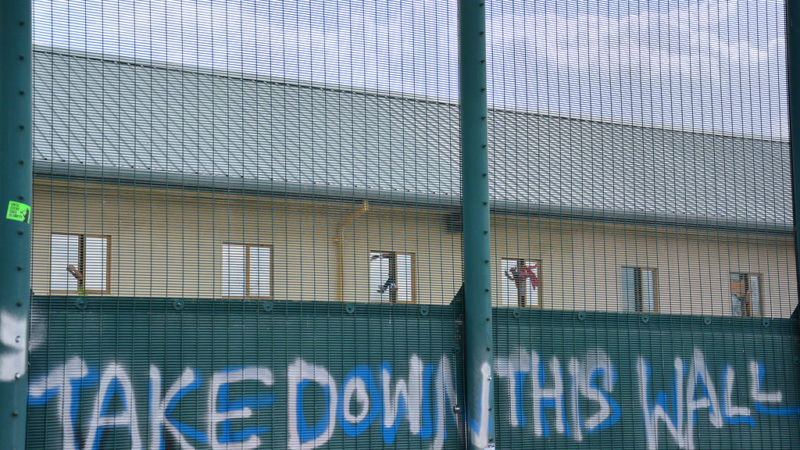 Yarl’s Wood: perhaps the country’s most notorious immigration detention centre. Dogged by controversy, it was dubbed ‘a place of national concern’ by Her Majesty’s Inspector of Prisons in 2015, the same year that Channel 4 exposed incidents of rape and racial abuse against detainees by security guards.

I have attended demonstrations outside Yarl’s Wood, and seen detainees waving and holding makeshift placards out of the few inches their windows will open, but this week was my first time inside the centre.

Other politicians before me have been denied access. My own party’s co-leader, Caroline Lucas MP, has had her request to visit soundly ignored.

As we approached Yarl’s Wood, the centre tucked away in a large, dilapidated business park in the middle of the Bedfordshire countryside, four haphazardly-positioned light-up reindeer greeted me. Not that these can be seen by the 400 women and men detained in the detention centre — these reindeer are an attempt to make the place look less stark for the visitors.

After going through several layers of security, I was let into a visitors’ area, with a conspicuous lack of decorations. Allocated a number for a table, I made my way over to meet Seema*, who has been locked in Yarl’s Wood for four and a half months.

Wearing a tracksuit and flip-flops, her face conveyed the non-stop stress she has been feeling since being detained in July. Her hair is failing out; she motioned to a growing bald spot on her scalp. Originally from India, she fled an abusive marriage, coming to London on a work visa.

When the visa expired, she met a woman who offered to get her a new one, for a price. Seema worked in a branch of a well-known fast food outlet, until one day in July when immigration enforcement came to her work and arrested her for having false papers. It was the first she knew of the fact.

“In India, my husband was so paranoid. He would beat me, burn me with cigarettes, cut me.” She showed me the marks on her arms from the abuse she endured.

“Even when I was on the phone to my parents, he would make me be on speakerphone so that he could hear what we were saying. When I first moved to the UK, he was video-calling me, saying ‘show me under your duvet, show me what’s in your kitchen cabinets, show me what’s in your bathroom’. He was trying to make sure that I wasn’t living with someone else.”

Two weeks prior to my visit, Seema had an operation at Bedford hospital. She has stage four endometriosis (as a former nurse, her medical knowledge is impeccable), and this causes her a great deal of pain and gynaecological problems.

Despite a doctor at the hospital, upon her discharge, telling escorts that Seema must not be left alone for the first 24 hours after the operation, she was returned to Yarl’s Wood, put in a room on her own, and left for four days.

When she later complained to the doctor at Yarl’s Wood about this, his reply was, “Well, 24 hours are over now and you are absolutely fine. What’s the point of complaining about it now?”

“He said, ‘You’re young, you can take care of yourself.’ I was in so much pain. Other women came in and rubbed my back and helped me to the toilet. One time I tried to go on my own but I became dizzy and collapsed on the floor, hurting my head and shoulder.”

After four days of only eating small amounts of food other women could bring to her, Seema asked one of the Serco guards if he would bring her a meal. She was told “the canteen’s closed now. You have money in your account. Go to the shop and buy something”.

Blood and pus was seeping through Seema’s bandages, which hadn’t been changed despite her begging G4S healthcare to help. She lifts her top up and shows me the keyhole incision in her stomach. It is red and inflamed.

“The doctor here at Yarl’s Wood told me that it wasn’t infected, but on Saturday another doctor came in and he told me it was. He prescribed me antibiotics, but I still haven’t been given them.”

Seema’s mental health has also deteriorated badly during her time in detention. “I sit in my room. I become so agitated now. Even a light, even the ticking of a clock… it’s mental torture.”

Despite the evidence of the ill-effects that detention has had on Seema, she has been declared ‘fit’ to be held at the centre. Research by the charity Women for Refugee Women, published last month, found that women classed as vulnerable, according to the Government’s own Adults at Risk guidelines, are still being detained regularly. Even when their health declines in detention, as Seema’s so clearly has, their detention will continue. On the day I visited, the British Medical Association released a report recommending that immigration detention be phased out.

Seema tells me that she now has a kind partner and his love for her is what keeps her going. He is an asylum seeker himself and has been unable to visit Seema because the couple fear that he too will be detained. Like any couple, they want to be together at Christmas.

“I love to be somewhere nice at Christmas. I like to have my tree. I’m more stressed now because it’s December, the month of happiness.”

I leave Seema outraged that she, and thousands like her, will end up in indefinite detention every year. Asylum seeking women, who have fled gender-based violence and come to the UK only for safety, have instead been mistreated in this cruel and wholly unnecessary way.

Immigration detention is inhumane, expensive and pointless. It compounds the trauma of the already traumatised. There is no place for it in today’s Britain.

Amelia Womack is deputy leader of the Green Party. She tweets here.

*Name has been changed in order to protect the individual’s identity.

One Response to “Inside Yarl’s Wood: ‘Seema begged for help as blood seeped through her bandages’”