David Davis just said the government has not investigated the economic impact of Brexit -- they've been lying to Parliament all along. 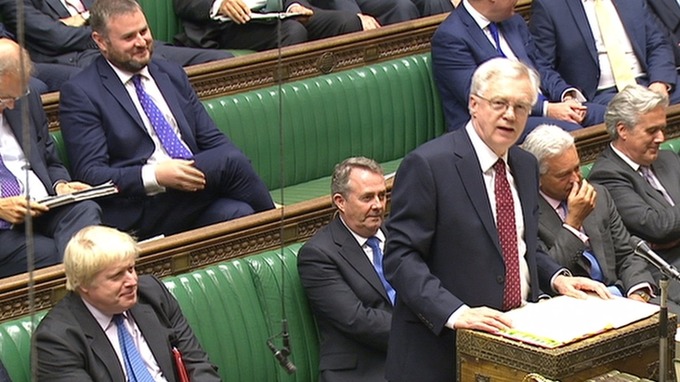 David Davis just told a Parliamentary committee that papers studying the economic impact of Brexit – that he claimed just weeks ago looked at the effects of leaving the EU in “excruciating detail” – don’t actually exist. Could Brexit get any more shambolic?

The Brexit secretary said this morning the government has not conducted the sector-by-sector economic assessments on the impact of leaving the EU, after having promised he was doing so just weeks ago.

Davis said that such studies would “not necessarily be informative”.

This is despite him saying last year that the government were “in the midst of carrying out about 57 sets of analyses, each of which has implications for individual parts of 85% of the economy.”

“Did the government undertake an assessment of leaving the customs union before the cabinet took that decision?”

“Not a quantitative one, no.”

Then Davis was asked to confirm whether the government had compiled assessments on the impact of Brexit on three different industries: automotive, financial services and aerospace. Mr Davis responded:

Davis has effectively admitted that the government decided to leave the customs union without a proper analysis of the economic impact.

If the papers don’t exist, as Davis now claims, the government will have been misleading Parliament, after having claimed they were studying the economic impact in “excruciating detail”.

The Liberal Democrats immediately accused the Brexit secretary of “misleading parliament from the start” and “being completely blasé about the threat Brexit poses to our NHS, economy and young people”.

“It is unbelievable that these long-trumpeted impact assessments don’t even exist, meaning the government has no idea what their Brexit plans will do to the country.”

“That’s not what they’ve been telling us for the last few months, so either they’ve been leading us up the garden path or they’re playing fast and loose with people’s livelihoods, communities and the economy. It’s unforgivable recklessness.

“It’s time that Ministers put people’s jobs first and urgently conduct and publish the impact assessments so people can plan for the future. Without them, we’re flying blind,” he added.

So it seems appears even the government don’t know the economic impact Brexit could wreak — and they’ve been hiding this from us all along. Who would have thought Brexit could get any messier?