A million or more could march against the President when he visits in February. 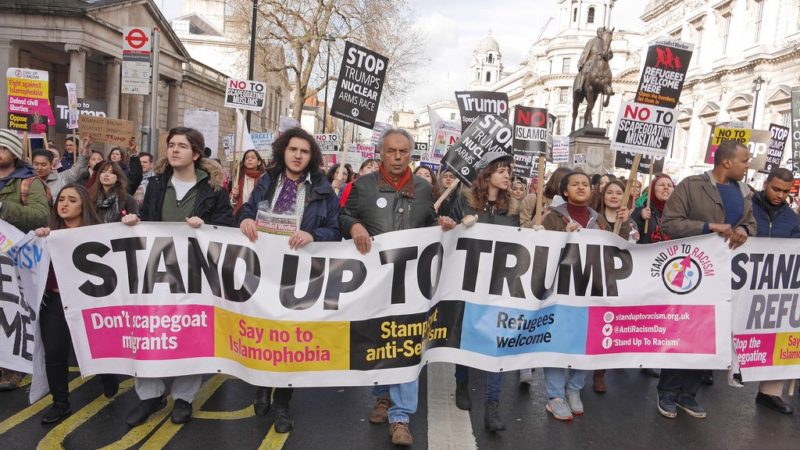 Donald Trump’s visit is going ahead – and now we have a date.

In the face of overwhelming calls for it to be cancelled, the Prime Minister is ploughing ahead with plans to welcome the disgraced US President – despite him promoting far-right groups in the UK and beyond.

After (presumably disgruntled) sources leaked the date of the trip, anti-racism campaigners are now planning what they hope will be among the biggest demonstrations in British history, set to rival the anti-war protests of the early 2000s.

The demonstrations will converge on the US Embassy and 10 Downing Street.

According to reports in the Sunday Times, which broke the story, Theresa May has been somewhat, ahem, economical with the truth:

“Despite claims by Theresa May that no date has been set for the US president’s first visit to the UK since entering the White House, the trip has been in the diary for at least 10 days, according to those familiar with the plans.

“The timing of the visit, which is expected to coincide with the opening of the new US embassy in London, remains unchanged despite last week’s diplomatic row.”

A million or more people could join the demonstration, according to organisers.

That figure doesn’t seem impossible, given that nearly two million people signed the petition calling for Trump’s proposed visit to be downgraded.

“If Donald Trump attempts to sneak into the UK to open the US Embassy on 26/27th February 2018 and also pop into see Theresa May at Downing Street – he will be met by a million of us attempting a citizens arrest of him for incitement to racial hatred.”

DROP WHAT YOU’RE DOING: Donald Trump is set to come to Britain on *26th/27th February*. Let’s make this the biggest demonstration in British history. Sign up here NOW: https://t.co/zK8jERfOE2 pic.twitter.com/rVdFP8sNso

Left Foot Forward will be covering plans for the protest over the coming months. Watch this space.

Now let’s make this the biggest protest in Britain’s history. Join the Facebook event here, and see you on the streets…

6 Responses to “A date has been set for Donald Trump’s visit: now let’s plan the biggest protest in UK history”