While mocking those who speak out against Trump's far-right retweets, one writer has been trumping up claims of anti-Brexit plots. 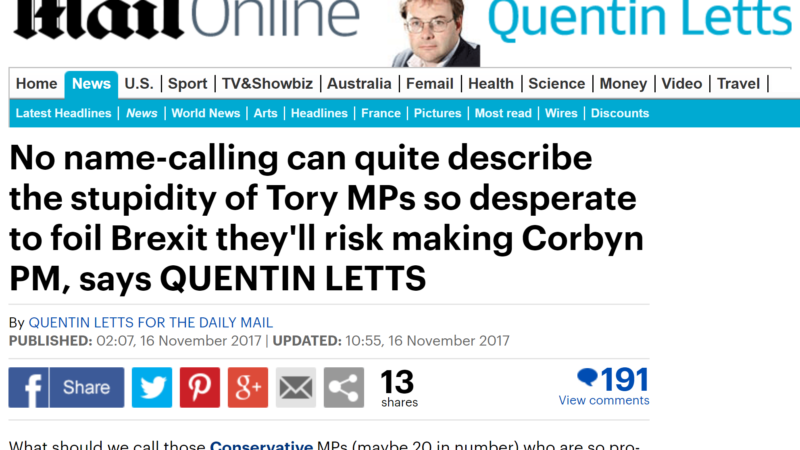 All journalists love a good rant. But among columnists, Daily Mail hack Quentin Letts perhaps loves ranting even more than most.

So it’s amusing to see a rant from him in Politico today, titled: ‘Trump whingers’ gift to the goons’:

“Now this sad little bunch of desperados have somehow ignited a journalistic and diplomatic palaver so intense that it led to an urgent debate at Westminster, dominated a press conference given by British Prime Minister Theresa May in Jordan and hijacked hours of rolling-news airtime.

“What a self-defeating show of puffed-up outrage.”

Except that it wasn’t a ‘sad little bunch of desperados’ who ignited the diplomatic storm.

It was the President of the United States – a man who decided to inflame racism and legitimise the far right in his own country and beyond by sharing the materials of a quasi-fascistic group, from a country with whom he is supposed to have a ‘special relationship’…before further inflaming tensions by turning it into an open diplomatic battle (publicly rebuking our PM for meekly expressing concern).

If that’s ‘puffed-up outrage’, how about these corkers just two weeks ago? On the supposed ‘Brexit mutineers’ – those backbench Conservatives the Telegraph screamed would halt Britain’s noble departure from the EU:

“Are these rebels ‘mutineers’ or figures of pious principle? They have been called ‘collaborators’ by one senior Tory. Is it improper to regard them as such? Or are these times so unusual that normal rules of engagement do not apply?

“Brexit, though it has yet to happen, was precipitated by a mighty plebiscite in June 2016. The electorate came out in unprecedented numbers. The result was close but clear and cannot be questioned.”

The author? You guessed it. The result of that ‘collaborator’ rebellion? The government defeated all key amendments against the bill – with just one or two Tories voting the other way. How about that for puffed-up outrage…

In the same piece, he implies Conservative MPs who don’t agree with 100% of the detail of the PM’s version of Brexit risk ‘usher[ing] in the hard socialism of Mr Corbyn’:

“Their actions weaken Theresa May…That could lead to a Jeremy Corbyn Government.

“At what point do these alleged Conservatives pause to wonder if Europhilia might not be the most important thing in politics? For, to usher in the hard socialism of Mr Corbyn would be an act of madness. It would be an act of fanaticism.

You could even call it an act of ‘self-mutilation’, done less out of high-minded internationalism than petty-minded vanity. No name-calling can quite describe the stupidity of that.”

No name-calling, indeed – from a man who calls Speaker Bercow a ‘goblin‘ and Labour’s Emily Thornberry ‘dimpled and husky, a lemon puff made flesh’, and who’s latest book is literally called ‘Patronising Bastards‘.

Or take his piece three days before, when discussion emerged that maybe setting the exact date of Brexit into law wasn’t worth the hassle, because Article 50 (which MPs have voted to trigger) has already determined it.

Letts wrote an article headed: “Is it so difficult for these eejits to honour the vote? QUENTIN LETTS sees Remainers chase their tails as they try to thwart the will of the people.” Granted Letts doesn’t write the headlines – but he’s happy for his paper to trump up phoney anger.

The double-standards suggest that maybe the issue isn’t about being anti-puffed-up-outrage after all – the issue is more political than that.