There are further tests for the secretary of state if he is to prove his environmental credentials. 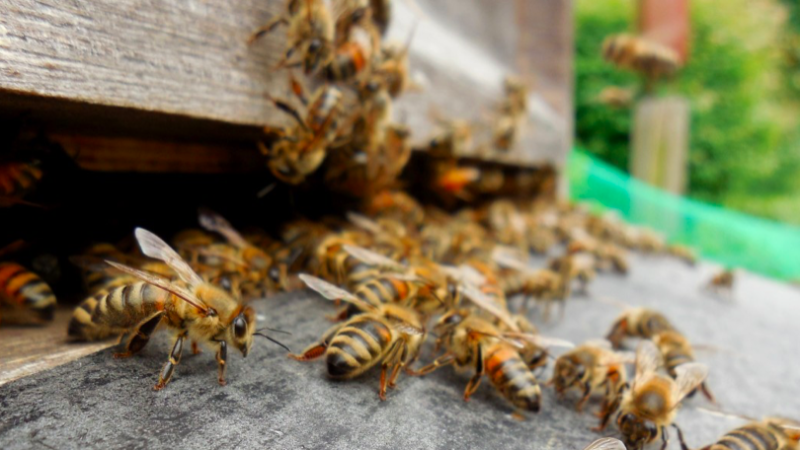 Last week, Michael Gove announced, to much rejoicing by many environmentalists, that he would back an EU ban on bee-killing neonicotinoids. But is this really a true sign of his environmental commitment, Molly Scott Cato argues not.

So has Michael Gove seen the green light about the collapse of life on Earth, which appears to be beginning with the insect kingdom? Will he turn himself into a green knight to assure his political legacy?

Many environmentalists have been astonished by the public posture of Michael Gove since he took over at DEFRA. He talks to environmental NGOs a lot, and not just the ones who agree with him.

He goes to their dinners. He gives them small but juicy tidbits like a deposit bottle scheme or a public attack on the ivory trade. And now that ban on neonicotinoids. This is a bit awkward, because, as a Green, and often the bearer of bad news, you don’t want to criticise a politician who agrees with you.

Some seem to be viewing Gove through rose tinted glasses and have fallen for his ‘environmentalist’ claims. His latest attempt at wooing the green lobby is to announce a new post-Brexit environment watchdog, ignoring the fact that it was the Tories that abolished such a watchdog seven years ago.

I believe Gove is posturing on a series of environmental cheap wins merely to establish himself as a sheep, before revealing himself as a wolf.

We already see him avoiding the more contentious issues. None more so than glyphosate. This week, while the UK was abuzz with Gove’s announcement on banning neonicotinoids, our chaps in Brussels voted for the renewal of the license for this toxic chemical.

This is Europe’s most used herbicide and is linked to cancers and other health problems while damaging biodiversity and soil health. By voting to renew its licence, the UK ignored environmentalists and the one and a half million EU citizens who have signed a petition against it.

They also went against the wishes of other EU countries who want to see glyphosate banned, including France, Italy and Belgium. Perhaps that was precisely the point.

Gove’s approach to glyphosate is a much clearer test of his environmental credentials. At the heart of the debate over the use of this chemical is the precautionary principle: the idea that even in the absence of scientific consensus, a policy or action that might cause harm to human health or the environment should not be pursued.

Gove has yet to confirm whether his ‘environmentalism’ extends to embracing this principle. But it seems unlikely, especially because of his belief in what is falsely called ‘conservation agriculture’, otherwise known as the ‘no till’ or ‘minimum till’ method of preparing fields before a crop is sown.

Gove recently witnessed for himself such a farm in Shropshire. His host for the visit was none other than Owen Patterson, former environment secretary climate sceptic, who waxed lyrical about ‘innovative British farmers’ using ‘the most effective herbicide available.’

It’s true that tilling the soil to clear it of weeds before sowing has its problems. It disturbs the microbes, nutrients and organisms that make soil fertile and healthy, and releases carbon dioxide absorbed from the atmosphere and stored in the soil.

However, conventionally at least, no or minimum till relies on heavy herbicide and pesticide use to rid the soil of weeds and pests. Far from being ecologically sound, as the agribusiness lobby would lead us to believe, this can be extremely damaging for the soil and the life forms that reside within it. This has knock on effects on wildlife including birdlife and er, bees.

From his wooing of environmental groups and organisations, Gove will be well aware of the chemical-free methods of killing weeds. Of course, organic farmers already use non-chemical methods which result in organic farms having 50% more abundant plant, insect and bird life.

If Gove is to be taken seriously as an environmentalist he will need to weed out the harmful techniques being pushed by corporate agribusiness as they try and seduce us into believing we can have our cake and eat it: chemical methods which deliver both safe food to eat and protect our environment. What they really want to grow of course is their profits.

Instead Gove will need to provide a clear guarantee that banning neonicitinoids is just the start and that he will not give the green light to any toxic substances in our farming.

He would also promise sufficient subsidies for British farmers to adapt to non-chemical methods and enable them access to viable and affordable alternatives.

In politics it’s useful to remember the adage: ‘by your friends shall ye know them’. Let’s not forget that Michael Gove and Owen Paterson – while seemingly talking very different languages on the environment – are still partners in crime on pushing a hard Brexit, cruel austerity cuts and a host of other damaging policies.

Gove is a subversive and a political chameleon so he is a challenging opponent. But the green movement would be wise to keep him in special measures.

Molly Scott Cato is Green MEP for the South west and is a member of the Agriculture Committee in the European Parliament.

8 Responses to “Why has Michael Gove banned some bee-killing pesticides in the UK but not others?”