The UN climate talks themselves are funded in part by corporations who have no wish to end our dependence on fossil fuels. 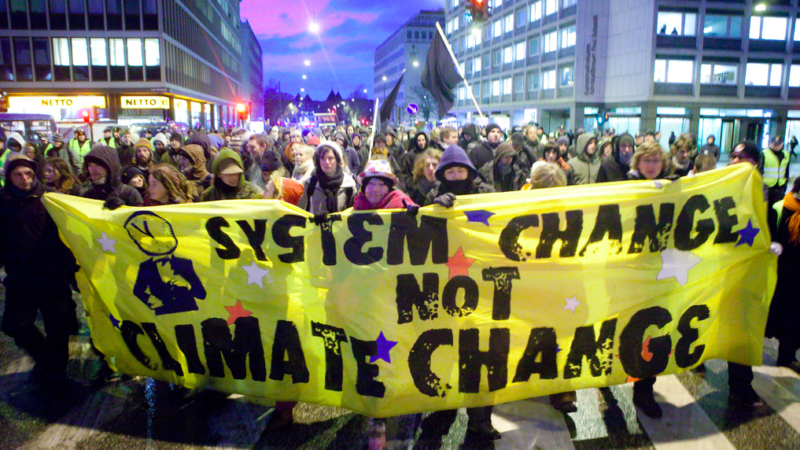 As the next round of UN climate talks (COP23) begin in Bonn today, we are all hoping for significant action to back up the promises made in Paris nearly two years ago — the need for urgent action could not be clearer.

From the forests fires in southern Europe that claimed hundreds of lives to the worst hurricane season ever seen in the Caribbean and floods and droughts across the world, the talks come at the end of a summer where Nature has made very clear that climate change is deadly serious and is happening now.

More concerning is evidence that the climate feedback loops that we have been predicting for decades are beginning to kick in. Rising sea temperatures mean that heat stored in our oceans is being released, reducing the seas ability to provide a buffer against planetary warming.

Arctic ice melting means that the quantity of light reflected from the surface of the planet is reduced, the so called ‘albedo effect’ increasing warming.

The melting of the arctic tundra is releasing methane that has been held frozen for millennia, a greenhouse gas 25 times more damaging to our climate than carbon dioxide.

In the face of such conclusive evidence that we are moving into the era of runaway climate change the question we are all asking ourselves why didn’t we act sooner?

The answer is clear: vested interests in the fossil fuel industry have lied about the true scale of the risk from climate change, have created artificial think-tanks to create fake science, and pressured politicians into stalling the action that is needed to protect our climate.

Now we learn that the fossil fuel lobby has also been distorting and diverting the COP process itself. The manipulation of the global effort to tackle climate change was revealed in a new report by the transparency NGO Corporate Accountability.

Called Polluting Paris, it reveals how fossil-fuel, agribusiness and big finance interests are using climate change to swell their profits rather than acting to protect the climate for humanity.

The most shocking revelation is that since the beginning of UN climate change talks they have been funded by exactly the same companies that depend for their existence on the burning of fossil fuels.

Corporate Europe Observatory argue that this sponsorship gives the fossil corporations special access to push failed solutions like carbon capture and storage and stall the policies that would be in the interests of the world’s citizens, such as phasing out the use of fossil fuels as rapidly as possible.

They call for the ending of all sponsorship of UNFCCC processes by corporations whose interests are in conflict with its objectives and for the funding of future COPs to be paid for by the world’s richer countries.

The big fossil polluters – from Électricité de France (EDF) and Shell to the World Coal Association – have also distorted the work of the UNFCC Technology Mechanism, intended to speed up the transfer of renewable energy technologies to the world’s poorer countries, so vital to ensure that they can meet with carbon targets while also bringing the benefit of electricity to their citizens.

We need to relieve the fox of its responsibility for the global henhouse and insist that the energy corporations who have caused our problems do not oversee the roll-out of clean technologies across the world.

The great hope for climate action is actually the planet itself, or the way the soil that makes up our landmass can be used to draw in atmospheric CO2 and lock it in as organic carbon.

This requires organic farming methods and techniques such as agro-forestry that blend the planting of trees and crops.

But even this potential is being distorted by Agribusiness, which has co-opted the idea of ‘climate-smart agriculture’ to mean a system of high-tech, intensive, chemical farming.

We should reject this attempt at greenwash and reclaim the idea of farming for the climate using natural farming methods.

My Swedish colleague Max Andersson MEP has been highly visible on this issue, first through his work with a pre-conference stakeholders meeting in Bonn in May. European Greens have proposed that:

“A ‘firewall’ should be put in place between the fossil fuels industry and the UNFCCC, so that organisations whose business or funding model relies on activities that run counter to the objectives of the UNFCC are not given an influential role in the process.”

Anderson continues: “the WHO Framework Convention on Tobacco Control has adopted a specific Article 5.3 to “protect policies from commercial and other vested interests of the tobacco industry”.

“A similar policy should be put in place by the UNFCCC. A robust conflict of interest policy, adapted to the UNFCCC context and including a clear definition of conflicts of interest, should also be adopted.”

The Bonn talks are about putting into the practice the promises made in Paris. Politicians across Europe celebrated this agreement and were keen to identify themselves with it. What they are not so keen to do is to condemn the fossil fuel lobby, partly because many benefit financially.

This sort of hypocrisy has to end. The climate must come first and the vested interests of Big Oil and its dirty money can have no place in Bonn or at future COP debates.

Molly Scott Cato is MEP for the South West and Green Party speaker on Brexit. She tweets here.

3 Responses to “Why aren’t we acting on climate change? It’s simple: the power of corporate lobbying”