Taking direct action against fracking wasn’t an impulsive decision but a last resort. I had exhausted every option through every democratic channel available to me. 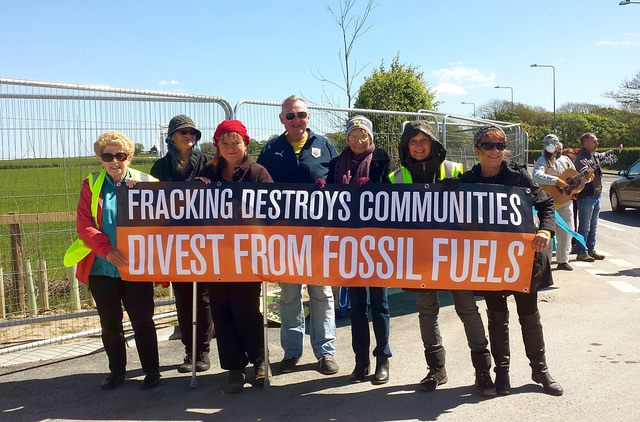 I’ve had a criminal record for seven days now, after spending my whole life on the right side of the law.

Alongside 11 others, I was convicted in the Blackpool Magistrates Court on Friday, receiving a 12 month conditional discharge and ordered to pay court costs of £250.

What was our crime? Peacefully protesting against fracking.

In 2015, Lancashire County Council rejected fracking company Cuadrilla’s application to test drill at Preston New Road, but – in a blatant subversion of democracy – the decision was overturned by one man in government – the Secretary of State for Communities and Local Government

On July 3 this year, a group of us ‘locked on’ through pipes and barrels outside the site as part of a month-long series of protests supported by campaign group Reclaim the Power. We had a last cup of tea before wrapping up warm in sleeping bags – where we stayed until we were arrested.

And now we’ve been found guilty of wilful obstruction of the highway. After the verdict was handed down last week, a Cuadrilla spokeswoman told the Lancashire Guardian that “elected councillors breaking the law should not be acceptable”.

I agree with Cuadrilla, but not for the reasons they imply. It’s not acceptable that the only option I had left was to put my body on the line. I had no choice but to put myself at personal risk to try to protect my community. That’s what I was elected to do.

I’ve represented Lancaster Central on Lancashire County Council since 2013. I have a mandate to stand up for what my constituents want and I’ve had more correspondence from people about fracking than on any other issue.

I wasn’t the only councillor arrested either. Kirkham town councillor Miranda Cox and Fylde borough councillor Julie Brickles were also convicted alongside me on Friday. That’s a representative from every layer of local Government, all opposed to Cuadrilla imposing fracking on our communities.

We’ve been criminalised for taking part in a peaceful protest against fracking, which residents are overwhelmingly opposed to. Shale gas is neither needed nor wanted in Lancashire.

Taking direct action against fracking wasn’t an impulsive decision but a last resort. I had exhausted every option through every democratic channel available to me.

During the hearing, the judge pointed out that neither Cuadrilla nor the Government were on trial. But if anyone should be, it’s them. Together they have trampled over local democracy to put our countryside, community and climate at risk.

In a show of staggering hypocrisy, UK representatives have just been in Bonn, Germany at the UN climate change talks promising to meet our international obligations. But at the same time, the Government is offering financial support to the shale gas industry.

Meanwhile, the anti-fracking movement is growing. A diverse range of people from all sorts of backgrounds have come together to fight this.

The outcome of my case was disappointing but I have no regrets. I was protesting for the right reasons and it should not be a crime to protect the planet – especially when our Government is failing us so terribly.

Gina Dowding is a Green Party county councillor in Lancashire.

2 Responses to “I was convicted for protesting against fracking. As a councillor, I have no regrets”