While May rules out hard borders, the Tories' bed partners in Westminster are now openly contradicting her. 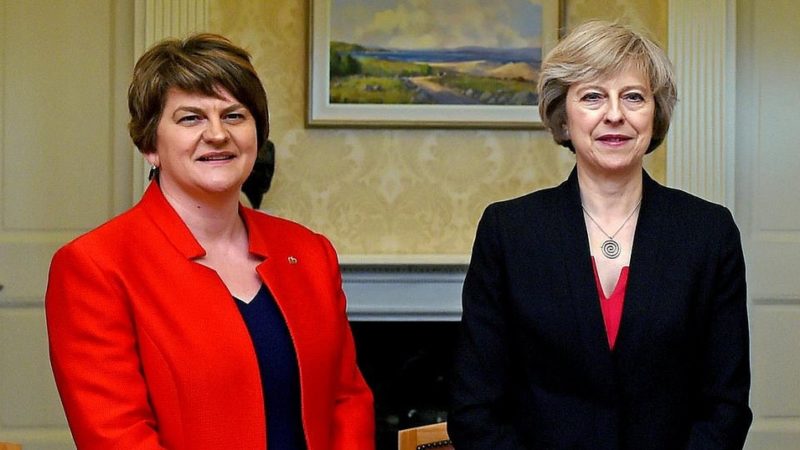 Yesterday, the Conservative’s deal-partners in Westminster ruled out the most logical solution to the Irish border question.

Speaking at an event at the Conservative Party conference, DUP Leader Arlene Foster excluded any Brexit agreement that would see Northern Ireland remaining in the single market and/or the customs union. That means a hard, physical border is on the cards.

Her comments come after the European Parliament yesterday approved a motion which suggested that this would be the only logical way of preventing a hard border between Northern Ireland and the rest of Ireland.

Arlene Foster, whose party is propping up the Tories, described as a “complete nonstarter” any suggestion that Northern Ireland should somehow remain in the single market or the customs union, with a new border being put down the middle of the Irish Sea.

But Sinn Féin MEP Martina Anderson welcomed the passing of the European Parliament resolution, arguing that it was “an indication of the growing support for special status for the north within the EU”.

It comes after a former adviser to David Cameron, Matt O’Toole, wrote for the Irish Times how the issue of the Irish border was, in many respects, an afterthought throughout the Brexit campaign.

Bemoaning the lack of focus given by the leave campaign, he notes:

“Vote Leave had virtually nothing to say on Ireland or the Border, but sustained no identifiable damage to their cause as a result.”

He notes that Cameron too did not see it as a major issue: while many in Cameron’s team were “angry about Leave’s approach to the Irish question…the truth was that not enough target voters cared enough to make it a central campaign issue.”

With the Prime Minister meanwhile set to deliver her key note conference address later today, she could well have done without comments made by the French Minister for European Affairs.

Speaking to the BBC’s Hardtalk programme, Nathalie Loiseau tore into the state of Brexit negotiations:

“For the time being on the three issues you mention, the conditions for the European citizen in the UK, the border with Ireland and the financial settlement, there has been no progress…

“The question is to have a moment when we can say that there is sufficient progress. There is no detailed position of the United Kingdom on either of the three issues.”