Newport West MP tells Left Foot Forward that the 'cavernous stupidity of our politicians' is to blame for rise in drug deaths, as he launches bid to un-ban the bud. 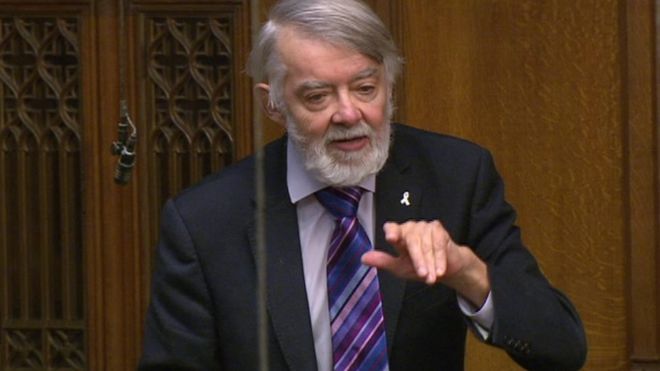 Paul Flynn is not known for pulling his punches. But when it comes tackling Britain’s drugs laws, the Labour MP for Newport West knocks other politicians out in the first round.

Today the Office of National Statistics released the latest figures on drug related deaths in England and Wales. And the results are a national scandal.

2,593 people died from the use of illegal drugs in 2016. That’s higher than 2015. In fact, it means record numbers of people have died from drugs – for the fourth year in a row.

In July, Paul Flynn stood up in the House of Commons and said: “I would call on people to break the law. To come here and use cannabis here and see what happens.”

He himself had helped a woman suffering Multiple Sclerosis do just that, giving her with a cup of hot water for her to drink cannabis tea.

Mr Flynn is angry. Not just at the failure of UK drugs laws, but at the politicians who have allowed them to continue.

In an interview with Left Foot Forward, he said he is taking on “the innate cowardice of British politicians over the last 50 years.”

“Policies on drugs have been prejudice-rich and evidence-free. We’ve seen an increase in drugs harm, drugs use and drugs death – yet no political party has had the courage to tackle the problem in a practical way.

“We’re in this crazy position now that we’ve had the harshest drug laws in Europe since 1971, and the highest number of [drug-related] deaths ever. There is criminal culpability in our drugs law in letting people die.

“The government have produced a drugs strategy that’s vacuous, that repeats the errors of the past 50 years and will make the situation worse. So many countries have decided that prohibition makes the issue worse, and they’ve seen spectacular successes. But we’re blind to it.

He’s joined in his critique of the government’s drug strategy by Labour’s Jeff Smith MP, who told me:

“I’m concerned that our drug policies clearly aren’t working, and this Government’s recent Drug Strategy doesn’t have the long-term vision to halt this worrying rise [in drugs deaths].”

Jeff Smith himself is among those who, like Paul Flynn, want to see steps towards decriminalisation.

Paul Flynn points to an amusing problem facing countries that have found better solutions than locking people up for getting high:

“The intelligent pragmatic decriminalisation policies of Holland have given them a crisis in their prisons – they no longer have enough prisoners to fill them.

“In Portugal in 2001 there were few people who thought decriminalisation [of all drugs] was work. Yet they forced the policy through, and halved the number of drug deaths in a short time, and saved huge amounts in prison and police costs.

“Many states in America have decriminalised cannabis use. Trudeau is charging ahead with policies that are practical and intelligent. But we’re still stuck in the myths of Richard Nixon who believes that prohibition drug use would disappear. It has failed as spectacularly as the prohibition of alcohol failed.”

Mr Flynn is not shouting at the sidelines about this though. When Parliament is back, he will be introducing a Bill to decriminalise cannabis use. And it will coincide with direct action on the 10th October.

Railing against the “cavernous stupidity of politicians,” he’s putting out a call for that date:

“People should come to the House of Commons and eat or drink their cannabis as a token act of civil disobedience, and prove that the law is an ass. It is unenforceable.It has no respect.

“In some parts of the country the police and courts are disregarding parliament on this and acting in their own way. The police are not arresting people for cannabis use and certainly not people who are ill.”

Indeed, he holds his harshest words for his fellow MPs: “It’s time to say to politicians: ‘get out of the way’.”

“The politicians are responsible for the rise in deaths. No other country in the world is having the same experience as we’re having.

“Public opinion, police opinion [and] court opinion is way ahead of our timid politicians.”

Despite recess, he’s taking no holiday from his campaign. This week he is writing to Home Secretary Amber Rudd and Shadow Home Secretary Diane Abbott to call for an inquiry into the situation.

Given the new findings, it’s hard not to wish him all the best in his crusade. The war on drugs has, in his inimitable words, been a “50 year calamity in which lives so many lives have been lost.”

There has to be a better way. It’s good to see, if you’ll excuse the pun, this feisty MP holding no prisoners when it comes to the fight for reform.

See also: One in five young people are taking drugs. It’s time to legalise and regulate.

4 Responses to “Paul Flynn MP: People should take cannabis in Parliament to show the ‘law is an ass’”