Number of complaints rapidly rising following letter from MPs - as the newspaper tries to cover its back... 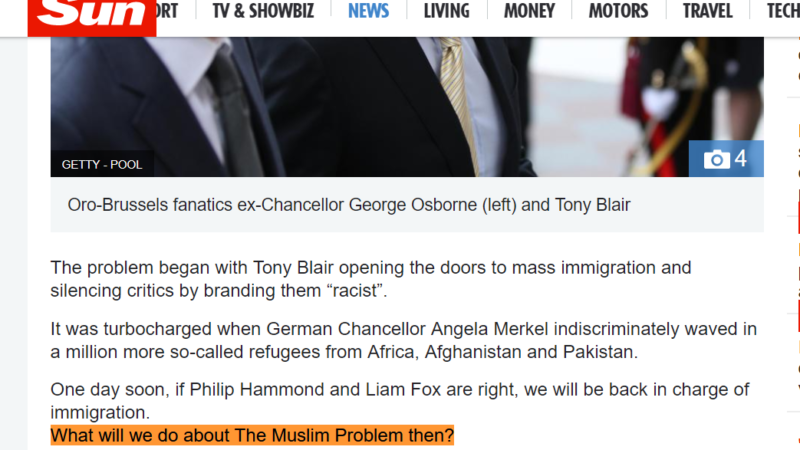 Over 230 complaints have now been made to press regulator IPSO against an article by former political editor Trevor Kavanagh’s which referred to ‘The Muslim Problem’, Left Foot Forward can reveal.

Yesterday the Independent reported that 150 complaints had been made to the regulator against the columnist’s anti-Muslim rhetoric.

That figure has now risen by 50% in just a day – and looks set to rise much further.

“We’re now up to 230 complaints…We have a policy of not commenting on individual complaints while they are being assessed and/or investigated.” When asked how IPSO were supposed to make an impartial decision on this given that Trevor Kavanagh sits on its Board, we were told:

“Complaints are dealt with by our Complaints Committee…The Board do not judge on complaints.”

Few expect the Board to judge each complaint – the question is whether the Complaints Committee will be likely to chastise their organisational superior.

Whatever the case, it now appears the Sun themselves are trying to cover their backs. Earlier today, the article ended with the dark line: “What will be do about The Muslim Problem then?”

A small point, but the Board of Deputies of British Jews, Tell Mama and Faith Matters noted in their complaint to IPSO:

“The printing of the phrase ‘The Muslim Problem’ – particularly with the capitalisation and italics for emphasis – in a national newspaper sets a dangerous precedent.”

Yet – straight after publishing this piece on 107 MPs writing to the Sun’s Editor against Kavanagh’s remarks – the publication dropped the caps: Clearly makes up for a whole lot of racist language right?…

See also: MPs are right to stand up to the Sun’s racist anti-Muslim rhetoric