There can be no tolerance for Nazi-like language: bigots must be shown the door. 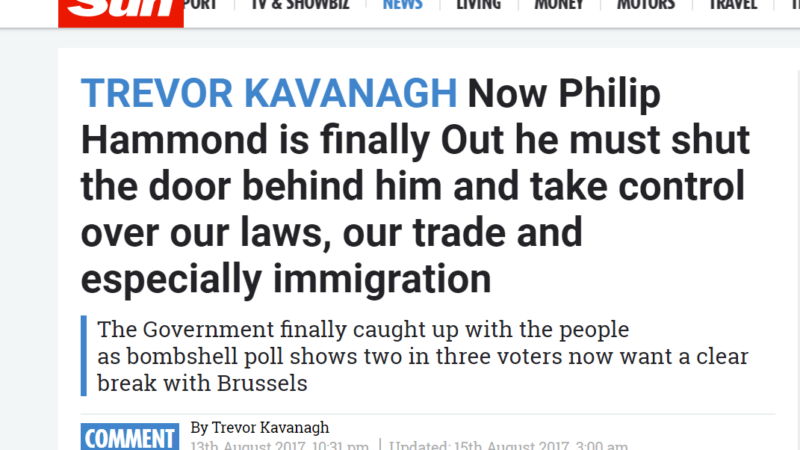 UPDATE 1: Just after this was published the Sun mysteriously de-capitalised ‘The Muslim Problem’ in Trevor Kavinagh’s piece…

UPDATE 2: More than 230 people have now complained to IPSO about the column. And guess who sits on the Board…

On Sunday, the Sun published a column that, even by their standards of dog-whistle politics, was beyond the pale.

This was rhetoric that directly brings to mind talk of ‘The Jewish Problem’. Indeed, both Muslim and Jewish organisations made that very point.

“Thanks to former equalities chief Trevor Phillips, and Labour MPs such as Rotherham’s Sarah Champion, it is acceptable to say Muslims are a specific rather than a cultural problem.”

In case it wasn’t clear he thinks that Muslims in general are a problem – rather than specific bad people – he finished his piece:

“What will we do about The Muslim Problem then?”

And the backlash was rightfully significant.

In a complaint to press regulator IPSO, the Board of Deputies of British Jews, Tell Mama and Faith Matters wrote:

“[This] harks back to the use of the phrase ‘The Jewish Problem’ in the last century, to which the Nazis responded with ‘The Final Solution’ – the Holocaust.”

Kavanagh poses no peaceful answer in his article. He simply ends with that dark question.

Today, MPs have pushed back, too. The Independent reports that over 100 MPs, led by Labour’s Naz Shah, have written to the Sun’s editor Tony Gallagher, arguing:

“Muslims currently face threats from far right and neo-Nazi groups in the UK and your publication of this article can therefore only be seen as an attempt to further stoke up hatred and hostility against Muslims.”

It’s important to remember the Sun’s track record when it comes to this. As the letter points out, in October last year, the paper published a piece by Kelvin MacKenzie which attacked Channel 4 presenter Fatima Manji for wearing a headscarf. He called it ‘massively provocative’.

‘Provocative’ is one word you might use to describe the paper’s article after the EU vote: “Where the Brex was won: Streets full of Polish shops, kids not speaking English…but Union Jacks now flying high again.” The paper were forced to pull the article, following a rise in hate crime.

Shockingly, IPSO cleared the paper of wrongdoing in the Channel 4 case. Were they to let off the paper this time, faith left in the watchdog might disappear entirely.

But perhaps that’s because IPSO’s Editors’ Code is so weak on racism: it only prohibits: “prejudicial or pejorative reference to an individual’s race” [my italics] – rather than racism against a whole group, as racism so often is.

The point however is this: there can be no excuse for language that hints at ‘solutions’ to entire groups of people. That is the language of lynching, the rhetoric of racist mobs.

It’s good to see MPs from all parties standing against hate today – and they are right to call for the paper to “consider whether Mr Kavanagh’s brand of bigotry fits with [the Editor’s] vision for the paper].”

Now, the Sun must pull the piece – and put a stop to racism in the UK’s largest newspaper. In a week of fascist violence in the US, there can be zero tolerance for hinting at ‘final solutions’. Kavanagh must go.