Did Theresa May even consider the DUP's paramilitary links? 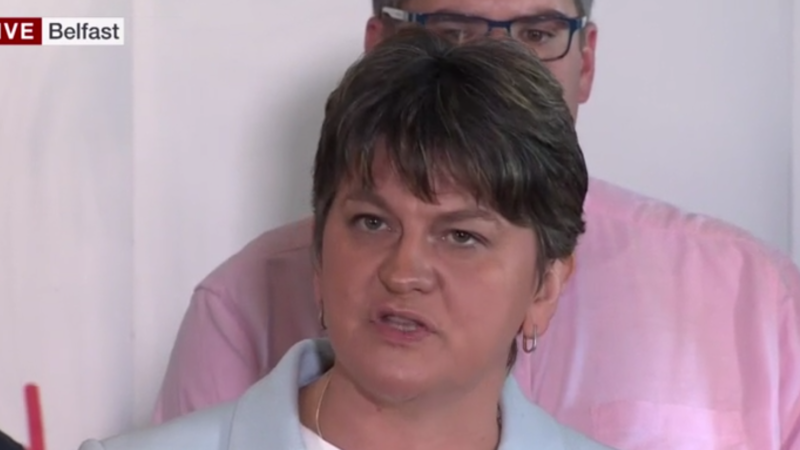 For weeks before the general election, senior Tories and the right-wing press relentlessly attacked Jeremy Corbyn for his alleged support for Sinn Féin, and former ties to the IRA.

He was repeatedly described as a terrorist sympathiser, and opponents made the ridiculous claim that a Labour government would go into coalition with Sinn Féin, a party that since its foundation has refused to take its seats in Westminster.

Now, a new Hope Not Hate investigation finds that just a week before the election, DUP leader Arlene Foster took tea with Jackie McDonald, a leading member of the UDA, a loyalist paramilitary group.

“On 31 May this year, a little over a week before polling day, DUP leader Arlene Foster met with UDA ‘Brigadier’ Jackie McDonald at a community office in the Taughmonagh area of south Belfast. This was just days after the UDA’s ‘rebel’ faction had carried out a murder of a man in Bangor in front of his three-year-old son.

Mrs Foster claimed that the meeting with Jackie McDonald was not pre-arranged and instead took place while she was in the area canvassing for votes. Challenged on why she had not used the opportunity to demand McDonald denounce violence and disarm the Loyalist group, she simply replied: ‘I had no need to say it to Jackie McDonald. Jackie McDonald knows my views very, very clearly.'”

This is one of very many links between the DUP and UDA, as Hope Not Hate illustrate. Indeed, the UDA and other paramilitary groups openly endorsed DUP candidates.

So where was the uproar from the British press when Theresa May described the DUP as ‘friends and allies’ with whom the Tories ‘have enjoyed a strong relationship over many years’?

The DUP’s social policies alone should be enough to exclude them from a formal government deal.

However, their highly-charged sectarian rhetoric and associations must also be a major consideration, particularly given the threats already facing the Good Friday Agreement after Brexit.

As Jonathan Powell, Britain’s former chief negotiator in Northern Ireland wrote in the Guardian yesterday, ‘since 1990, the British government has been neutral in Northern Ireland, backing neither the unionists nor the nationalists.’

“That was the basis for the peace negotiations in Northern Ireland, which allowed us to be an honest broker between the sides and reach the Good Friday agreement in 1998. And it has been the basis ever since under which we have resolved problems between unionists and nationalists that have disrupted the implementation of the peace agreement that ended 30 years of war.

No British government since then, Conservative or Labour, has chosen sides. Even John Major, when his political support in the House of Commons was at its most parlous, never took the step of relying on unionist MPs to save his government because he knew that to do so would make it impossible for him to play the role of mediator in Northern Ireland.”

There are two conclusions we can draw from all this. May either failed to consider the full ramifications of her decision in the wee hours of Friday morning, or she did consider them and decided that she cared more about clinging to power than about the future of the peace process.

She should rapidly clarify which it was.

See also: Who are the DUP? Extreme social conservatives who have blocked gay marriage and abortion in Northern Ireland