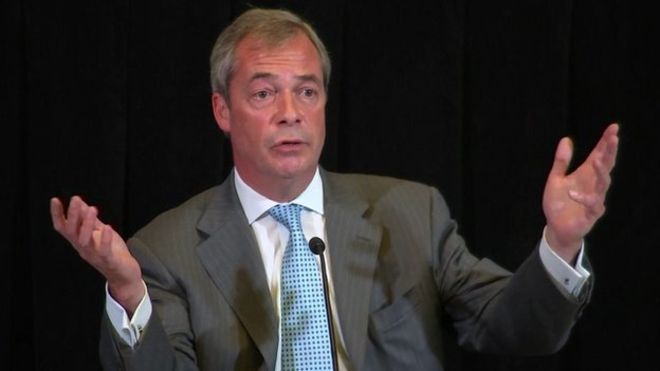 You know an interview has gone well when it ends with the following exchange:

“You are away with the fairies. You must be mad. I have never heard anything so immature in all my life. Because of Brexit I will lose my option to travel to Hamburg? You should be on a comedy show, not be a journalist.”

Today, Gemany’s Zeit Online has published the transcript of an extraordinary interview one of its reporters conducted with Nigel Farage, in the ex-UKIP leader’s office in Brussels.

Farage (and his press spokesperson, who repeatedly jumps in to the the journalist off) wanted to use the interview as an opportunity to spout his usual nonsense about Britain’s trade relationship with the EU. But Steffen Dobbert had other ideas, opening the interview with a sublime dig at Farage’s ubiquitous Union Jack socks:

From there, the exchange only gets better. Dobbert asks Farage a series of entirely legitimate and well-founded questions about his relationship with Julian Assange, his ties to Russia and his willingness to accept a substantial salary from the EU, an institution he claims has no validity.

And the Farage-bot — to put it kindly — goes haywire. 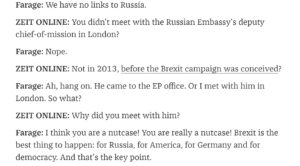 After intervening three times to try to try to steer the interview on to safer ground, Farage’s press spokesman eventually decided to put the boss out of his misery, and called the interview to a halt.