Like David Cameron, Theresa May is putting the union at risk 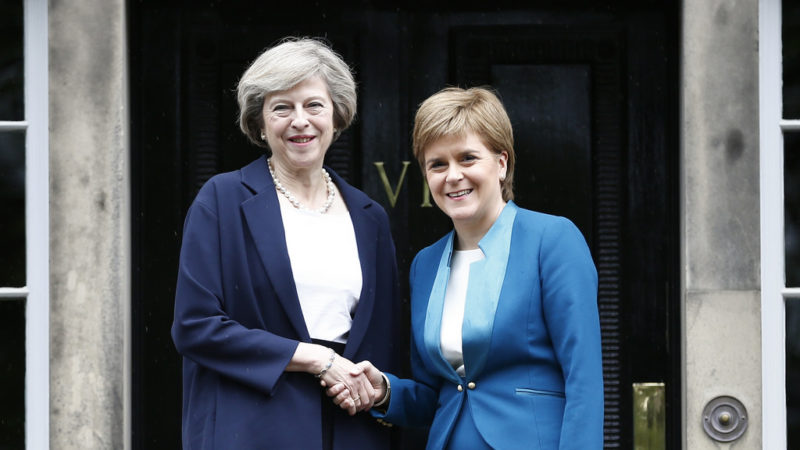 Theresa May’s reckless announcement of a general election represents one of the single biggest threats  to the unity of the United Kingdom since David Cameron’s 2015 General Election campaign.

Back then, Cameron’s efforts to warn of the dangers of an SNP/Labour alliance running the UK might have won him an election, but painted Scotland has an almost foreign land which should not be given any opportunity to have a say in how the UK as a whole is governed.

Now, we have the prospect of a general election which, for at least two parts of the UK, will be about whether they want to stay in Theresa May’s Brexit Britain.

Although its MPs will abstain in today’s Commons vote on whether to support the calling of a general election, the SNP are licking their lips at the prospect of making this election, across Scotland, about a choice between  remaining in Brexit Britain or the opportunity of an independent Scotland within the EU.

In its leader column this morning, the Scotsman declares that the calling of an election is a ‘bold and brave’ strategy for the prime minister, but agrees that she ‘does require a mandate if she is to make progress on Brexit’. It warns however against her conflating this with issues around a second independence vote in Scotland.  It explains:

“Where we take issue with her, however, is over calling a snap election to seek a mandate for Brexit, then telling Scotland that the same election – where people cast the same vote as everywhere else in the UK – is to be about Scottish independence. Remember the repeated assurances in 2014 that Scotland is an integral part of the UK with the same say as all other parts? Those ring hollow today.

“The same can be said of Mrs May’s argument that a referendum in 2018 or 2019 would be too early for Scots to make an informed choice on their future, when we are then given a matter of a few weeks to have our say on Brexit via the general election.

“Her tactic of turning a Brexit vote into an independence poll is also disrespectful to the one million voters in Scotland who voted to leave the EU, and want to see their wishes carried out, but are now being told the chance they have to endorse it is to take second place to the issue of Scottish independence.

“If the Prime Minister wants an answer on independence, then she should ask that question when the time is right, and not confuse two issues which are too important to Scotland’s future to be treated in this way.”

The Labour supporting Daily Record however goes much further, declaring a snap election to be ‘nothing more than an opportunistic power grab’, and a ‘belated attempt to shore up support before the going gets really tough in the turmoil of quitting Europe.’

The paper goes on to warn that voters in Scotland are ‘tired of listening to the same old arguments and will have little enthusiasm for another trek to the polling booths.’

Meanwhile, in Northern Ireland, the campaign will take place against a backdrop of the parties seeking agreement on a new power sharing executive following last month’s elections to Stormont in the wake of the Renewable Heat Incentive saga.

That Northern Ireland Secretary, James Brokenshire’s argument that the talks can go on as normal as the parties are in engaged in an election over Northern Ireland’s constitutional future is bizarre to say the least.  It is perhaps the understatement of the year to argue, as the Irish Foreign Minister, Charlie Flanagan that a general election complicates the ‘fragile’ talks taking place in Belfast.

The Irish Times today declares that the election comes at a ‘bad time’ for Northern Ireland. It continues:

“There is little expectation that deadlocked talks between Sinn Féin and the DUP can make any progress ahead of the election and a deadline already extended until early May. No party will want to be seen to be ‘weakening’ ahead of polls which might see Sinn Féin bringing nationalists level with unionists.”

Writing for the Belfast Telegraph, its columnist, Ed Curran meanwhile game plays the likely picture in Northern Ireland during the election.  He writes:

“A winner-takes-all contest in each of Northern Ireland’s 18 constituencies encourages block voting within unionism and nationalism and leaves the smaller parties in a political no-man’s-land.

“Theresa May, like Edward Heath in 1974 and Tony Blair in 2001, has handed the big battalions a political lifeline.

“Instead of the ignominy of failure in the current talks at Stormont, the Democratic Unionists and Sinn Fein can look forward to a win-win general election in which they could wipe out middle-ground opposition perhaps once and for all.”

“Mrs May said yesterday that the only way to “guarantee certainty and stability in the years ahead is to hold this election”.

“That may be so for the rest of the UK, but the likelihood is that the poll on June 8 will not guarantee certainty nor stability for Northern Ireland. More worryingly for her in the future, the outcome of the forthcoming election may do the very opposite.”

‘History teaches us that general elections held at awkward times for Northern Ireland have the capacity to make matters worse,’ Curran writes.

This election may make things worse elsewhere as well.

See also: In Scotland, how long is a generation?