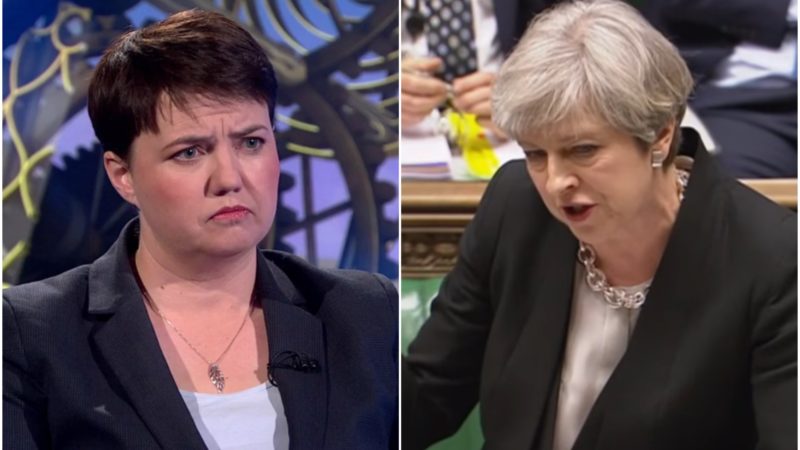 In his final speech on the steps of Downing Street, David Cameron highlighted foreign aid spending as one of his proudest accomplishments.

Now, less than a year later, Theresa May is refusing to confirm whether the 0.7 per cent spending pledge will be included in the 2017 Conservative manifesto.

But it’s not her predecessor’s support for foreign aid spending that May should worry about, but that of someone who’s been widely tipped as a possible successor.

On Newsnight last night, Ruth Davidson, restated her ‘absolute’ commitment to the 0.7 per cent target, saying that ‘international aid not only benefits…the countries that recieve it but we benefit too’

The importance of this issue to the Scottish leader can hardly be overstated. At an event in London a few months ago, she said that the only Westminster job she lusts after is international development secretary, ‘because I think you can do the most good for the most people’.

And when I asked how she came to terms with Conservative colleagues who denounce aid spending, she responded that ‘they’re just wrong’.

This raises an intriguing question about the relationship between Davidson and May. So far, despite their differences of background, political approach and attitude to Brexit, they have presented an entirely united front. So much so that Davidson was invited to introduce the prime minister at Tory conference.

The benefits flow both ways. Davidson’s close relationship with the British Conservatives strengthens her opposition to the SNP juggernaut, while May — whose understanding of Scottish politics leaves a great deal to be desired — will be heavily dependent on Davidson to lead the Conservative campaign north of the border.

What’s more, a close association with her young, gay, socially progressive Scottish counterpart is unquestionably good for the prime minister’s image, balancing out her strait-laced and socially conservative reputation.

As a result, if foreign aid does drive a wedge between the two, progressive parties — especially in Scotland — must exploit it.

The Tories have a long history of giving an impression of unity, even as they fight like cats and dogs behind the scenes. Highlighting an irreparable fracture between their two most popular leaders will put a crack in that illusion.

Westminster critics should highlight that May’s insular, little Englander politics are too extreme even for her own allies in Scotland. And in Edinburgh, Davidson should face relentless questioning as to how she can continue to support a British Conservative Party that on foreign aid — as well as on Brexit and the union — is acting in stark opposition to her values.

After all, shouldn’t Davidson have the ‘moral courage’ to defend the world’s most vulnerable people — even if it means crossing her party leader?

See: England is the last place on earth the Conservative Party has left to rule