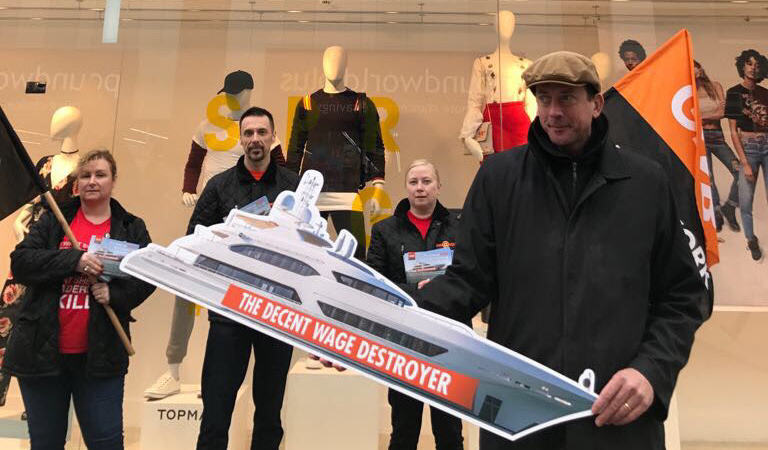 GMB members protested outside four branches of Topshop and other outlets in the West Midlands over the disgraced billionaire’s ‘poverty pay’ for supply workers at Spectrum, which delivers goods to Green’s stores.

The union said tomorrow’s 24-hour strike of around 100 workers from 6am could ‘throw Arcadia’s deliveries from Topshop, Miss Selfridge and Burton Menswear into chaos’.

But the strikes will go on every month ‘indefinitely’ after starting late last year until Green agrees to pay workers a real living wage of £8.45. 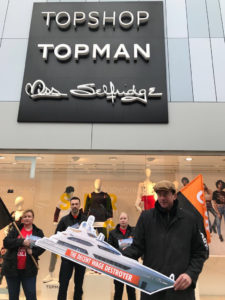 “Philip Green may enjoy skulking around on his £100 million super yacht – but I doubt he’ll be quite so pleased to see ‘The Decent Wage Destroyer’ sail into view.

Our members, loyal staff many of whom have worked at Spectrum for years, have been forced into permanent industrial action just to make ends meet thanks to Arcadia’s poverty pay.

Sir Philip’s luxury yacht costs an estimated £10 million a year to run – is he seriously suggesting he can’t afford to pay his workers £8.45 an hour?”

Green paid £360 million towards BHS’s pension fund in February after running the retail firm into the ground and allegedly using its money to enrich himself.

MPs have voted in favour of stripping him of his knighthood.