Will these Article 50 headlines come back to haunt them? 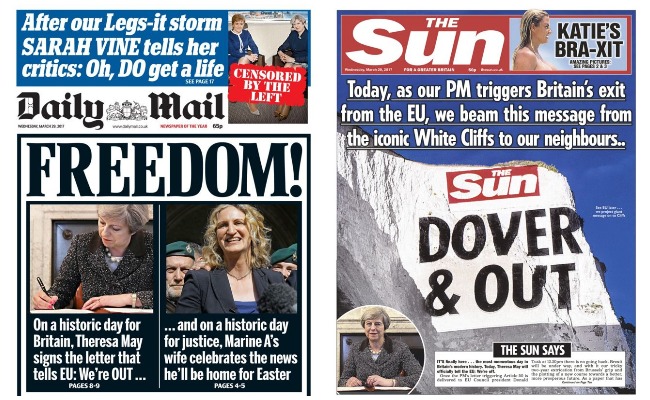 As Theresa May smashes a bottle against the good ship Brexit, it might be worth pausing to see how the country’s two biggest newspapers are hailing the news.

Triggering Article 50 and thereby formally launching Britain’s exit of the European Union is something of a historic moment.

Certainly the Prime Minister thinks so, having herself photographed writing the letter in question, apparently without fear the image might come back to haunt her.

For the Daily Mail and The Sun, it’s a moment of jubilation and triumphant chest-beating – a patriotic mardi gras of editorial subjectivity. The Mail, (ever sensitive to potential Scottish readers), has splashed with:

On a historic day for Britain, Theresa May signs the letter that tells EU: We’re OUT…”

Out and proud. Since the other two stories on page one – the release of Marine A, whose case the Mail has championed, and columnist Sarah Vine defending her latest piece of sexism against her critics – both amount to a battle cry of vindication and success, we can take this as a claim by the Mail to have helped secure the triggering of Article 50 now, and in this manner.

Never a paper for understatement, The Sun has projected the following on the White Cliffs of Dover:

“Today, as our PM triggers Britain’s exit from the EU, we beam this message from the iconic White Cliffs to our neighbours…”

Note the words: ‘Our PM’. Does this mean the papers’ or the readers’?

Flashing back a bit, here’s how these papers greeted the EU referendum result last June: And their celebrations the next day: These are worth noting, since it’s not just the Prime Minister who will have to live with the images generated and positions taken at this ‘historic’ juncture.

As things turn pear-shaped, as they almost certainly will, people should remember who was responsible, (or who tried to claim responsibility), and who played the role of cheerleader.

See: Theresa May warned Brexit would make us less safe and prosperous. What happened?

2 Responses to “Freedom! Daily Mail and the Sun boast of Brexit – will they live to Bregret it?”