What is it about this living John Bull cartoon the paper finds so attractive? 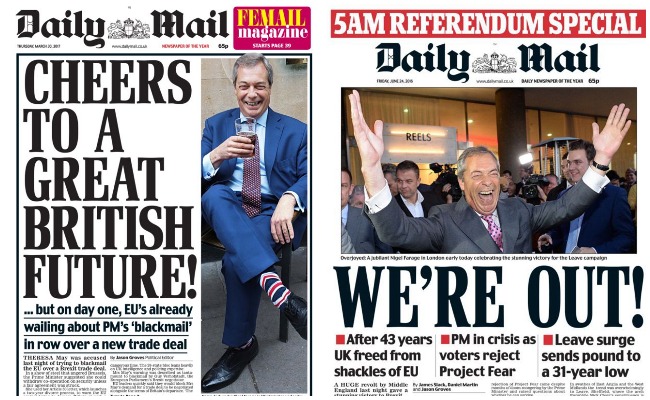 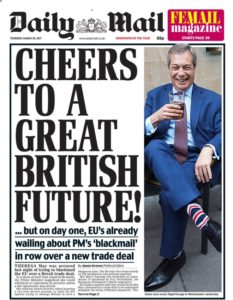 You would think today would be the perfect time to brandish a picture of Theresa May, (perhaps in one of her outfits the paper likes so much), especially given the Mail’s pride at supporting her leadership campaign.

In a statement aimed at criticism of the paper’s ‘Legs-it’ cover story earlier this week, the Mail said:

“For the record, the Mail was the paper which, more than any other, backed Theresa May for the top job.”

It’s not the first time the Mail has plastered Farage on the front page in relation to Brexit. After the EU referendum result, the Mail splashed with this: 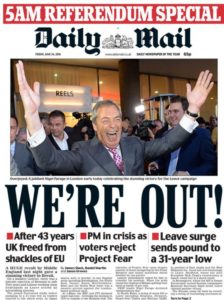 One expects this from the Farage-loving Daily Express. But why has the May-supporting Mail given over its front page to a former leader of UKIP who has never won a seat in parliament and was excluded from the official campaign to leave the EU?

One suspects the clue is in the headline:

“CHEERS TO A GREAT BRITISH FUTURE”

Farage has modelled himself into an avatar for a certain kind of British nationalism – a beer-swilling ‘ordinary bloke’ down the pub, and a living walking talking John Bull cartoon. (He’s wearing Union Jack socks, for heaven’s sake.)

This is the image he has cultivated with the help of an unthinking media – and it’s the embodiment of the mythical Britain papers like the Mail, and many in the country and the Cabinet, hope to revive.

Farage is a symptom of something childish and reactionary in contemporary British culture, and so long as that remains the case his red-faced grin will continue to stare out of TV sets, computers, smartphones and newsstands.

See: Freedom! Daily Mail and the Sun boast of Brexit – will they live to Bregret it?

3 Responses to “Britain is leaving the EU – and the Daily Mail has Nigel Farage on its front page, again”