Productivity growth was higher from 1945-1972 than under Thatcherism 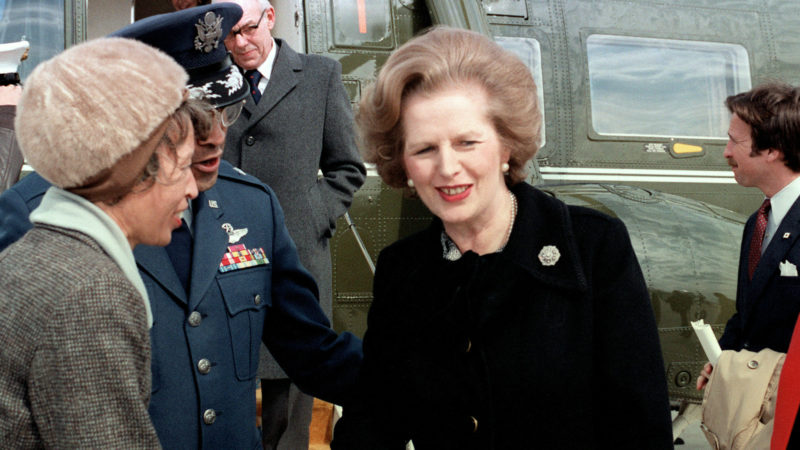 Chris Edwards says the privatizations started by Thatcher ‘transformed the British economy’ and boosted productivity. This raises an under-appreciated paradox.

The thing is that privatization isn’t the only thing to have happened since the 1980s which should have raised productivity, according to (what I’ll loosely call) neoliberal ideology.

And the workforce has more human capital: since the mid-80s, the proportion of workers with a degree has quadrupled from eight per cent to one third.

Neoliberal ideology, then, predicts that productivity growth should have accelerated. But it hasn’t. 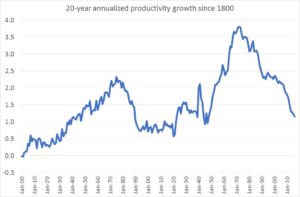 In fact, Bank of England data show that productivity growth, averaged over 20 years, has trended down since the 1970s.

Another possibility is that the productivity-enhancing effects of neoliberalism have been outweighed by the forces of secular stagnation – the dearth of innovations and profitable investment projects.

But there’s another possibility – that neoliberalism has in fact contributed to the productivity slowdown.

I’m thinking of three different ways in which this is possible.

One works through macroeconomic policy. In tight labour markets of the sort we had in the post-war years, employers had an incentive to raise productivity because they couldn’t so easily reply upon suppressing wages to raise profits.

Also, confidence that aggregate demand would remain high encouraged firms to invest and so raise capital-labour ratios. In the post-social democracy years, these spurs to productivity have been weaker.

Another mechanism is that inequality can reduce productivity. For example, it generates (pdf) distrust which depresses growth by worsening the quality of policy; exacerbating “markets for lemons” problems; and by diverting resources towards low-productivity guard labour.

A third mechanism is that neoliberal management itself can reduce productivity. There are several pathways here:

– Good management can be bad for investment and innovation. William Nordhaus has shown that the profits from innovation are small. And Charles Lee and Salman Arif have shown that capital spending is often motivated by sentiment rather than by cold-minded appraisal with the result that it often leads to falling profits.

We can interpret the slowdowns in innovation and investment as evidence that bosses have wised up to these facts. Also, an emphasis upon cost-effectiveness, routine and best practice can deny employees the space and time to experiment and innovate.

Either way, Joseph Schumpeter’s point seems valid: capitalist growth requires a buccaneering spirit which is killed off by rational bureaucracy.

– As Jeffrey Nielsen has argued, “rank-based” organizations can demotivate more junior staff, who expect to be told what to do rather than use their initiative.

– The high-powered incentives offered to bosses can backfire. They can incentivize rent-seeking, office politics and jockeying for the top job rather than getting on with one’s work. They can crowd out intrinsic motivations such as professional pride.

And they can divert (pdf) managers towards doing tasks that are easily monitored rather than ones which are important to an organization but harder to measure: for example, cost-cutting can be monitored and incentivized but maintaining a healthy corporate culture is less easily measured and so can be neglected by crude incentive schemes.

– Empowering management can increase opposition to change. As McAfee and Brynjolfsson have shown, reaping the benefits of technical change often requires organizational change.

But well-paid bosses have little reason to want to rock the boat by undertaking such change. The upshot is that we are stuck in what van Ark calls (pdf) the ‘installation phase’ of the digital economy rather than the deployment phase. As Joel Mokyr has said, the forces of conservatism eventually suppress technical creativity.

All this is consistent with the Big Fact – that aggregate productivity growth has been lower in the neoliberal era than it was in the 1945-73 heyday of social democracy.

I’ll concede that this is only suggestive and that there might be another possibility – that the strong growth in productivity in the post-war period was an aberration caused by firms catching up and taking advantage of pre-war innovations.

This, though, still leaves us with the possibility that slow growth is a feature of normal capitalism.

Chris Dillow is an economist and author of The End of Politics. He blogs at Stumbling and Mumbling, where this article first appeared. Follow him on Twitter CJFDillow

9 Responses to “Neoliberalism has failed to boost productivity. Social democracy has a better record”