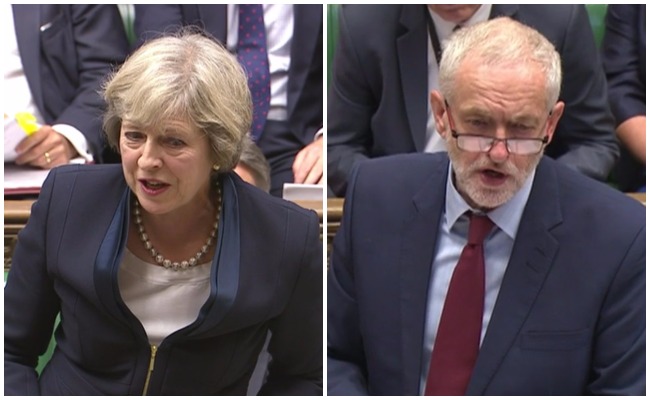 Ahead of Theresa May’s big speech tomorrow, a YouGov poll suggests the public has a murky picture of her Brexit priorities.

In other words, respondents were nearly evenly split between those who thought May wanted ‘hard Brexit’ or ‘soft’. Meanwhile, a full fifth (20 per cent) said they were not sure. 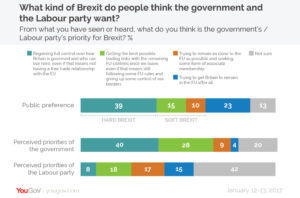 No doubt contradictory and incoherent statements by the Foreign Secretary, Chancellor and May herself played their part.

But if the Tories are failing to make their priorities clear, the poll was far worse news for Jeremy Corbyn’s Labour Party.

A massive 42 per cent said they were ‘not sure’ what Labour’s Brexit priorities are, with roughly equal chunks for ‘soft’ (18) and ‘very soft’ (17) Brexit – and 15 per cent saying Labour backs remaining in the EU.

Eight per cent said Labour backs the ‘hard Brexit’ option as defined above.

This suggests Labour’s efforts to argue it accepts the Leave result in the referendum but has a different vision for Brexit have not been successful, and that the party is failing to make its position clear to the public.

Perhaps a sharper idea of what May has in mind will present a chance to clarify Labour’s alternate version of Brexit?

See: Jeremy Corbyn lays out a ‘Labour Brexit’ that would work for everyone

See: Ian Dunt: Can anyone work out Labour’s position on Brexit?