British trade unions are standing in solidarity with the PT 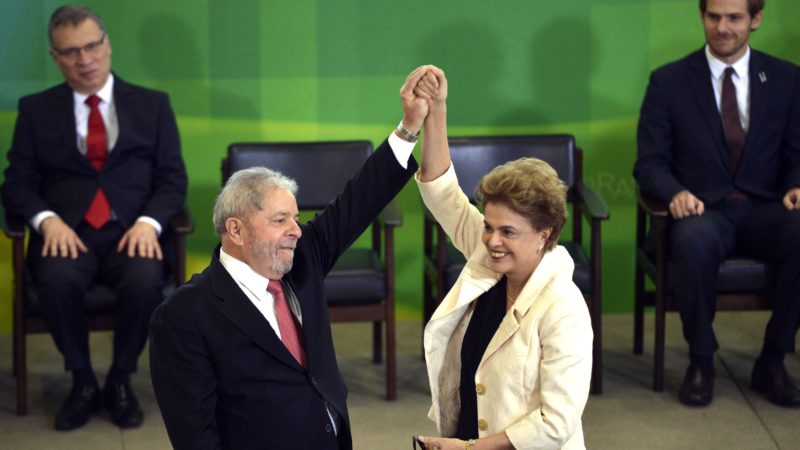 On the first of January 2003, Luiz Inácio Lula da Silva, the candidate of the PT (Workers’ Party) was elected president of Brazil.

Less than 20 years after the end of a brutal military dictatorship, with poverty rampant and a failing economy, the Brazilian people had exercised their wish for a break from the past and a new, fairer, society.

Over the course of the next 14 years, under President Lula and his successor, Dilma Rousseff, ordinary Brazilians saw a colossal change in their standards of living and the country around them. The PT won three successive presidential elections, and after receiving 54.5 million votes in the 2014 elections it became clear to the Brazilian elites that it would be impossible to regain power by electoral means.

Predictably, moves to oust President Dilma by undemocratic means soon followed. Right-wing parliamentarians pursued a relentless campaign to impeach her, culminating on 31 August 2016 with the installation of an unelected coup government led by Michel Temer.

As Temer’s government sets about a vicious austerity program combined with attacks on democracy and representation, here we look at the reasons behind the popularity of the PT and the gains made over the previous 14 years.

Under Dilma and Lula, record levels of public investment along with a quadrupling of exports and low inflation turned Brazil from a failing country into one of the most significant actors in the world economy.

Between 2008-2013 while the world financial crisis took hold, Brazil was the third fastest growing country in the world (among the largest economies), growing its GDP by 20% – an incredible achievement for a country so large. In the same period, the UK economy declined 1.37%.

One of the landmark projects of the PT’s reign was the Foma Zero (Zero Hunger) program, a major scheme aimed at reducing extreme poverty and provide access to basic food. A key part of this scheme was the BolsaFamilia (Family allowance), which gives financial aid to poor families who ensure their children are vaccinated, given (free) education and health checks.

The scheme now covers nearly 14 million households, and the results are globally significant. Under President Lula alone 20 million Brazilians were lifted out of poverty, halving the poverty rate in seven years.

Brazil remains a male-dominated society, but several important steps forward have been taken since 2002 to improve the situation of women.

Under President Lula, a federal domestic and family violence code was passed which tripled the previous level of convictions for domestic violence. Women’s police units were formed and a federally funded hotline created for victims of gender violence.

These investments, along with significant improvement in access to education and labour rights and a department dedicated to women’s rights have meant women have been able to take some strides toward equality, but this is clearly under great threat from the coup government of Michel Temer and his cabinet of entirely white men.

Thanks to significant increases in public investment, over 20 million jobs were created in Brazil between Lula’s election at the start of 2013 and the end of Dilma’s first term in 2014.

This was a huge acceleration on the previous eight years, when only five million jobs were created, and had a dramatic effect on unemployment, slashing the annual average from 12.6 per cent in 2002 to 5.4 per cent at the end of 2013.

From 2002-2013, Brazil’s education budget increased from $28 billion to $106 billion. 18 new federal universities created, and the proportion of Brazilians with higher education went from 10 per cent to 23.4 per cent.

Affirmative action policies for low-income and non-white students have also been introduced, providing 1.2 million young people access to higher education who otherwise would not have had it. 51 per cent of those scholarships were provided to women, who now represent the majority of college students.

Thanks to a series of coordinated programs targeting malnutrition across multiple government departments including education, health, agriculture, social development and finance, Brazil under Lula and Dilma made exceptional advances in preventing malnutrition

The country surpassed the Millennium Goal of reducing the number of child deaths by 73 per cent, thanks to a ‘nutritional revolution’ let by the PT Government, as well as massively reducing the stunting of children’s growth caused by malnutrition.

In 2009 President Lula launched the social housing program ‘Minha Casa, Minha Vida’ (My House, My Life). The program benefits those families with an income below 2,000 dollars a month, and has already placed 10.5 million low-income people in 2.6 million housing units throughout the country.

Tackling exploitation in the workplace has been a major facet of both Lula and Dilma’s administrations – One of the first actions of President Lula on being elected, was to create a list of employers who were investigated and found to be using slaves.

Blacklisted employers are blocked from receiving government loans and have restrictions placed on sales of their products. Between 2003 and 2015, the government rescued 44,483 workers from what it calls ‘conditions analogous to slavery.’

Thse achievements explain why the removal of President Dilma Rousseff – and the ongoing right-wing media campaign against Lula in a bid to stop him becoming President again in the future – and the accompanying wave of harsh austerity measures in Brazil are a major blow to democracy and social progress, not only in Brazil, but for Latin America and throughout the world.

But as I saw when I attended the recent conference of the global federation of manufacturing and energy unions IndustrIALL  in the country, Brazilians are resisting both Temer’s power grab and his disastrous neoliberal slash and burn policies.

Lula is at the centre of this movement of resistance, which the international labour movement has a duty to support.

You can find out more on Brazil’s crisis from the No coup in Brazil initiative at their upcoming event: Stand with Brazil — An Evening of Solidarity at Unite this Thursday (2 February) at 6.30 pm. Follow No Coup in Brazil on Twitter and Facebook.