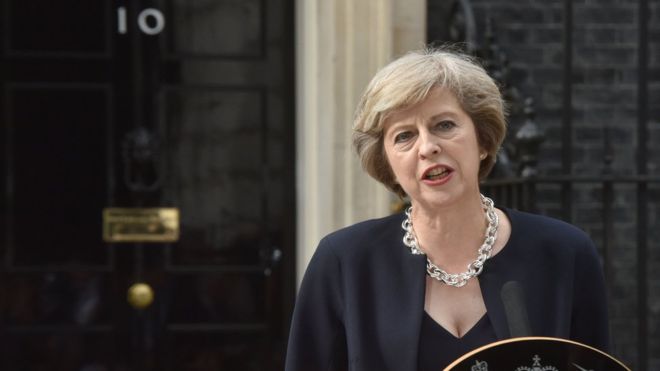 Theresa May wheeled out her usual rhetoric about responsible capitalism in this morning’s speech to the CBI annual conference.

‘Not enough people [feel] that they share in the wealth created by capitalism,’ she told business leaders, claiming that the ‘recent behaviour of a small minority of businesses and business leaders’ have undermined ‘the reputation of the corporate world as a whole’.

The solution, May reiterated, is reform of corporate governance. We agree, so do opposition parties, so do the trade unions.

Unfortunately, May also used today’s speech to backtrack on the only concrete policy behind her egalitarian rhetoric — putting workers on the boards of large companies.

While she insists that the government is still committed to ‘ensuring employees’ voices are properly represented in Board deliberations’, she has ruled out the tried-and-tested methods of achieving that.

This is the key extract from her speech:

“Let me be clear about some important points.

First, while it is important that the voices of workers and consumers should be represented, I can categorically tell you that this is not about mandating works councils, or the direct appointment of workers or trade union representatives on Boards.

Some companies may find that these models work best for them – but there are other routes that use existing Board structures, complemented or supplemented by advisory councils or panels, to ensure all those with a stake in the company are properly represented. It will be a question of finding the model that works.

Second, this is not about creating German-style binary boards which separate the running of the company from the inputs of shareholders, employees, customers or suppliers. Our Unitary Board system has served us well and will continue to do so.

But it is about establishing the best corporate governance of any major economy, ensuring employees’ voices are properly represented in Board deliberations, and that business maintains and – where necessary – regains the trust of the public.”

While we will have to wait and see what kind of mealy-mouthed proposals are outlined in the government’s forthcoming green paper, this statement makes clear that companies will not be required to give workers meaningful powers of corporate oversight.

Not even one executive board vote will be given to workers’ representatives, nor will the government propose ‘supervisory boards’, introduced in Germany as a check on executive boards.

The TUC, which had offered to cooperate with May on her workers’ on boards plans, has criticised her decision.

‘Theresa May made a clear promise to have workers represented on company boards,’ TUC general secretary Frances O’Grady commented. ‘The proposals in her speech today do not deliver on this.’

Support for the idea of putting workers on boards has surged in the months since the collapse of BHS. Although workers lost their jobs and are facing cuts to their pension entitlements, hundreds of millions of pounds were funneled from the failing company into the Philip Green’s family coffers.

“If companies like BHS had Supervisory Boards and employees and pension scheme members were represented on it, they would surely have asked questions about the consequences of extracting hundreds of millions of pounds from the company.”

In her speech to Conservative conference in October, May promised that worker’s rights would be ‘protected and enhanced’ by her government.

‘A change has got to come,’ she insisted. ‘So later this year we will publish our plans to have not just consumers represented on company boards, but workers as well.’

While the Tories will attempt to load the word ‘represented’ with all kinds of significance, the reality is simple. The prime minister made a promise to workers and now, in the face of powerful private interests, she has broken that promise.

She no longer has any claim to being a champion of the workers.

See also: The BHS scandal shows that we need workers on boards