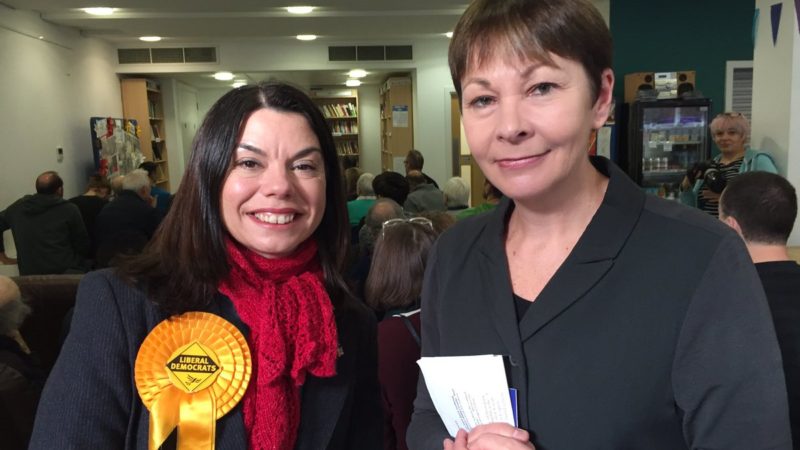 ‘We support a progressive alliance: Greens are not standing a candidate’. That’s the Green Party leaflet for the Richmond by-election happening this Thursday, following the resignation of Zac Goldsmith in October over Heathrow expansion.

And it’s brave stuff. This is the first time in recent history that a political party has put out materials backing (albeit indirectly) another party.

Something interesting is happening in Richmond. As I left the train station this Saturday, I was greeted first by a Green stall, explaining why they’re backing a Liberal Democrat-led ‘progressive alliance’ – and by activists from Compass, the left-pluralist think tank who want left-wing parties to work together.

They’re arguing that Richmond could be a testing bed for a better politics. As Compass say: ‘We want this to set the pattern for the next General Election’.

Of course, the fly in the ointment for those supporting such an alliance is that the Labour Party are running a candidate, despite many local members reportedly wanting the party to step aside for the Liberal Democrats’ Sarah Olney.

Yet among the Greens and the Lib Dems, an affinity is growing. When I got to the Green Party’s packed campaign event in the morning, Caroline Lucas was speaking about the importance of working together. She was followed by Sarah Olney, who praised the Greens for their decision to stand aside. It’s not often you see genuinely cross-partisan campaign events – not least in the midst of a hard-fought by-election.

Met with @CarolineLucas this morning. Ever so grateful for the local Green Party’s brave decision to stand aside in #RichmondPark pic.twitter.com/DFUq1p3A8k

Lucas told me that this campaign ‘isn’t so much about standing aside, it’s about standing up for a different kind of politics’. And it’s made all the more urgent by an electoral system which locks down healthy competition.

“I’ve been a member of the party for over 30 years…if I had a pound for every time I heard someone say I wanted to vote for you but I was worried my vote wouldn’t count, I’d be a very rich person indeed and the Green Party wouldn’t have any funding difficulties.”

But she also opened up about missed opportunities – pointing to Witney, where Larry Sanders (the brother of a well-known US socialist) recently stood, and won just a few per cent.

‘Greens, Labour, [and the] Lib Dems stood, we fought against each other – and the Tories got through…If we had of found a way of working together we could have beaten the Tory candidate,’ she said.

Richmond Park is therefore a lesson learnt from a previous campaign saw a big swing to the Liberal Democrats, but in the context of a crowded progressive marketplace.

But how has it been going down among voters? Green campaign manager Caroline Wren – who has the interesting task of running an election campaign without a candidate – told me it’s been ‘interesting to explain on the doorsteps’.

‘People do understand the rationale when we tell them about it – you can’t do that of course just by saying ‘progressive alliance and proportional representation’ because strangely enough that’s not very exciting to people’, she said.

But when they see it as an opportunity to oppose the government’s approach to Brexit, or indeed to challenge Leave-backing Goldsmith on his position, ‘people understand the decision and recognise it’s a bold and different move…Zac didn’t represent people’s views in this [70 per cent Remain-backing] constituency’.

But what’s next? For Lucas, it’s about ‘getting the conversation going more loudly and more widely’ – including getting Labour on board.

For Richmond Greens though, the angle is slightly different: this could be a reciprocal arrangement. The Lib Dems are ‘willing to talk about alliances in the run up to the 2018 council elections’, says Caroline Wren. Securing more councillors – something in short supply for the Greens in London – is an essential stepping stone to winning more Parliamentary representation.

The Lib Dems are being understandably cautious on making any promises. I spoke to Sarah Olney, who said it’s been ‘a very positive relationship…we share a very similar view on all the issues that are important in this by-election.’ But she was slightly more cautious about whether this could be UK-wide. ‘I think we just need to do it on an individual election-by-election basis.’

It seems the most likely outcome for both parties: a nationally-imposed alliance would be a recipe for activist revolts, and any deals have to make sense on the ground and among the membership. And while it may be a difficult thing for party leaders to embrace – the early signs appear encouraging.

And who knows, perhaps Labour aren’t so far from joining the cooperative push. South West Surrey have just broached the three main progressive parties to form an alliance there ahead of next year’s council elections. Labour overwhelmingly voted in favour of a deal.

The Greens have set a precedent in Richmond. As a product of an out-of-date voting system, it’s not a perfect one. But it does reflect a growing feeling that, in these dark new times, the left has to do something different. And they’re probably right. All power to the experimenters.

One Response to “Is the Richmond Park by-election a test bed for a better politics?”