In a speech to Conservative conference, May hinted at a hard, Tory-dominated, undemocratic Brexit 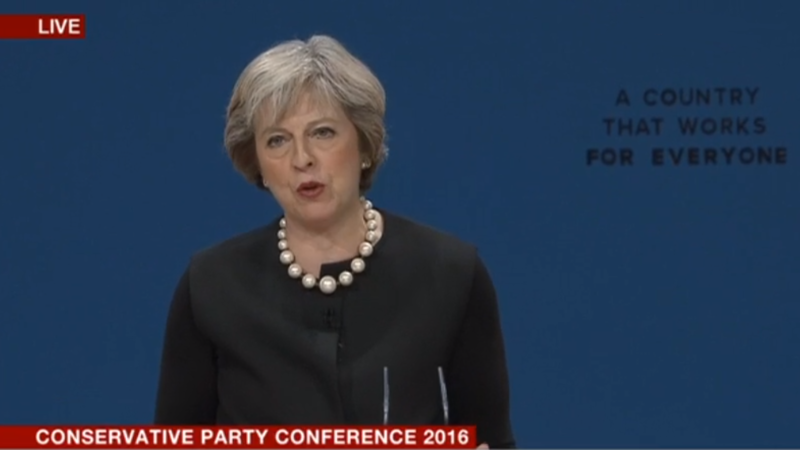 Theresa May has strongly hinted that she is planning a hard exit from the European Union, and from the single market, and that the Conservative government will demand absolute control of negotiations.

Having announced this morning that the government will trigger Article 50 by the end of March next year, the prime minister— who claims to have supported Remain — used a prelimary speech to the Conservative Party conference to outline her plans for Brexit in greater detail than ever before.

She laid the groundwork for exactly the kind of regressive, Tory-designed Brexit most feared by campaigners on the left.

From the outset, May relied heavily on Leave campaign rhetoric of sovereignty, telling a fawning Conservative Party audience:

“We are going to be a fully-independent, sovereign country, a country that is no longer part of a political union with supranational institutions that can override national parliaments and courts.  And that means we are going, once more, to have the freedom to make our own decisions on a whole host of different matters, from how we label our food to the way in which we choose to control immigration.”

While this doesn’t represent a direct renunciation of the single market, since both freedom of movement and product regulations are conditions of membership, her intention seems quite clear.

She also highlighted that in next year’s Queen’s Speech, the government will soon develop a ‘Great Repeal Bill’, which will remove the European Communities Act from British law. This was cheered by the conference audience, who may not have noticed that the prime minister also said she would reinstate almost all the EU law as British law.

Worryingly, May also reiterated that the process of exiting the EU will be as opaque and undemocratic as the government can manage, with power concentrated almost entirely in Tory hands.

She insists that neither the Commons nor Lords will get a vote on triggering Article 50 and that ‘the negotiations between the United Kingdom and the European Union are the responsibility of the Government and nobody else.’

In other words, the Tories will pursue their own agenda in the Brexit negotiations, actively eschewing further consultation with parliament and the people.

What’s more, because May claims that giving a ‘running commentary’ is not in Britain’s interest, most of the country will not even know what issues being negotiated, or how deals are being reached.

There is now a serious danger that the terms of Brexit will be premised on regressive Tory ideology, rather than the interests of the people. It was the Conservative Party that got us into this mess in the first place, they shouldn’t be trusted to get us out of it.