Dentists against Davies take heart. He's been doing this for years. 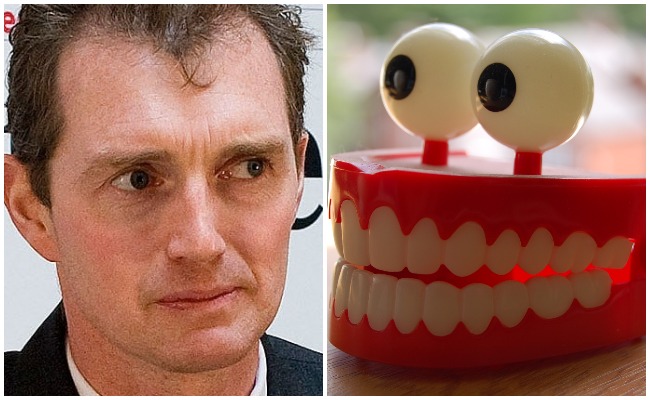 David Davies MP made headlines today after suggesting refugee children should have dental tests to make sure they are not adults posing as children to claim benefits.

But this isn’t the first time David ‘The Dentist’ Davies has put his hoof in his gob. Here are six of the weirdest and most outlandish things the loosely-wrapped Tory MP has said (that we know of):

Facing criticism back in 2012 for saying Tory plans to legalise gay marriage were ‘barking mad’, Davies took to Twitter to set the record straight, so to speak.

The MP said he had ‘once fought a gay boxer’ whom he got on well with, which he said proves he is ‘not bigoted’.

Once fought gay boxer. Respect & like.trained with after bout so not bigoted. actvists calm down- listen to other views http://t.co/dKDRu14M

He even posted a video of him punching the poor chap in the face. To show he wasn’t a homophobe. Just so we’re clear.

The first reply was from Tom Watson, who asked: ‘Is this a spoof account?’

In September this year, Davies issued a challenge to the ‘best scientists in the world’ to debate him on climate change.

He said: “..the BBC have accepted hook, line and sinker the so-called scientific consensus on climate change and not allowed anyone onto the airwaves who wants to question it.”

“If anyone from the BBC is listening, I will debate this with the best scientists they can find in the country or across the world. Bring them on.”

No takers so far. Which definitely proves they have something to fear.

What got Davies in hot water in 2012 and prompted his gay boxer Tweet (see 1) was partly his claim that most parents don’t want gay children.

Speaking to BBC Wales, he said:

“I think most people are very tolerant and have no problem at all if people are gay but, and I hate to say this in a way because I expect it’s going to cause controversy, but I think most parents would prefer their children not to be gay, knowing most parents want grandchildren if nothing else.”

Just to clarify, Davies was elected by the good people of Monmouth to speak on their behalf not by ‘most parents’.

To be fair to him though, he said in a Guardian interview shortly after: “If one of my children were gay I don’t think it would make any difference to the way I felt about them at all. I would want them to be happy and contented.” He was unable to explain the contradiction.

Last month, Davies accused the BBC of ‘institutional bias’ in favour of left-wing ideas. For evidence, he remarked:

“I have been in many BBC studios and canteens and I have yet to see anyone sitting there reading a copy of the Daily Express or the Daily Mail, loudly complaining about immigration, Brussels, or suggesting that claims about climate change are somewhat over-egged.

Yet this is a perfectly normal situation in many other places.”

Is it? Which places? Jeremy Clarkson’s drawing room? A Spitting Image sketch? If the BBC (which buys the Mail and the Guardian in roughly equal numbers, by the way) was like this, it would be guilty of right-wing bias.

Yes, there’s a theme emerging. Speaking to the Guardian, in that same 2012 interview, Davies tried to explain his concerns about sex education being too, er, detailed:

“If you’re going to explain the facts of life you’ve got to explain at some point, penis, vagina, they go together, this is how children are made.

Well, do you also have to start explaining in similar detail how gay sex is carried out?”

Asking for a friend.

6. Erasure is not for lesbians

Speaking of a gay school friend’s return to the hetero fold, Davies told the Guardian: “He’d started coming down to the pub at 16 with, you know, splits in his jeans, and started buying Erasure albums, and all the rest of it – and three years later he’s suddenly horrified by the whole thing!”

When asked by his female interviewer how his views apply to schoolgirls, he said:

“But you’re a lady, you’re a woman, so you wouldn’t have felt quite the same way. I mean, at school the girls all went out and bought Erasure without any issue.”

The Erasure test is very complicated, but it’s all we have.

Have you been affected by any of the weirdness in this article? Contact your dentist right away.