We need a great social transition, and Labour won't provide it 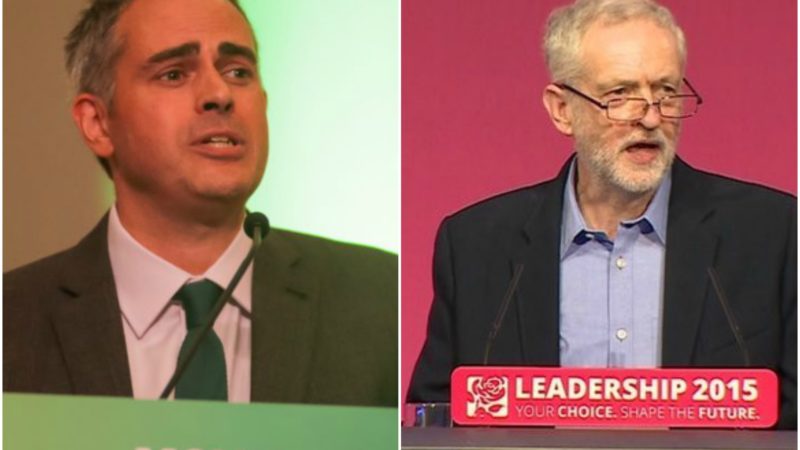 1.1 million votes for the Greens at the last election sent a clear message to Westminster – and to a Labour Party that had lost its soul.  Jeremy Corbyn has now embraced some Green policies, not least to oppose fracking.  There has been a clear political shift.

But as the dust settles on the inevitable churn that is a feature of the new political landscape, it’s clear that a strong, distinct Green Party is needed more than ever.

Labour’s confusion over Trident is a case in point. While Jeremy is personal advocate for a nuclear weapon free Britain, it looks likely that his party will fight the next election backing the renewal of this multibillion pound cold war relic. The Greens, on the other hand, are united in our opposition to Trident.

Similarly most Labour MPs abstained in a parliamentary vote on Caroline Lucas’s bill for a fair voting system, and the party abstained on her NHS Reinstatement Bill. Outcomes at odds with what many of Labour’s new members had a right to expect.

But the difference isn’t simply that with the Greens you know what you are going to get.  It is also that the Green Party is thinking in new ways — and offers bold solutions to the new challenges that Britain faces in the 21st Century.  We recognise the limits of globalisation and that the economy must urgently be made to work for everyone.

Nowhere was this clearer than in our different responses to the Government’s go ahead for Hinkley C.

The country had come to a clear fork in the road. The construction of what Greenpeace called the most expensive object on earth takes the country down a centralised path. It would risk our energy security and lock us into an expensive, jobs-poor deal for decades to come.  Most crucially we would lose the opportunity of investing in the decentralised, green industrial, jobs rich industrial revolution that the country so desperately needs.

Having previously talked a good game about supporting community energy Labour blew it, pledging its commitment to the Government’s new nuclear power, albeit urging a slightly better deal.

As well as being an icon, a modern day symbol of the difference between the Green Party and Labour, it also confirmed a tension that exists within Corbyn’s new policy platform.

The Green Party recognises that you cannot have your political cake and eat it.  You cannot support airport expansion, road building and a mass programme of corporate welfare for fossil fuels while claiming you will liberate the country from climate change.

We need a great transition.  Climate change demands a shift in thinking about the way we order and run not just our energy, but our society and economy too.  From the central to the local. From top-down to bottom up. Away from a reliance on credit fueled growth toward long term sustainability and resilience.

It is not good enough to pay lip service to giving people back control. We must move away from outdated paternalistic models, towards giving people a real stake in their communities, their railways, their hospitals and their schools.

Not just opposing selection, but creating inclusive education that works for everyone.  Not just reinstating public ownership of the NHS but seeing it as a pathway to allowing patients and doctors to shape its future.  And creating a smart transport system that is flexible and responds to the needs of the many, not the few.

We need an economy by, of and for the people.  That’s why, whilst we remain firm believers that a fairer, greener, more prosperous future is possible as part of the EU, we think that the country should continue to have a real say, and that means a second referendum on the terms of any exit from the EU.

That’s why we believe it’s time to transform our social security so it provides not just a real safety net but opportunity and choice in the face of globalisation and the gig economy, through a basic income. And that’s why we believe that there must be reform of our voting system, so that everyone’s voice is represented in the decisions that affect their lives.

There are other areas where Greens are different too – not least around the Green Party’s sustained commitment to the single market – because it’s our best chance of keeping environmental protections, safeguarding jobs and – crucial for us – protecting Freedom of Movement.

But perhaps most of all, there is a difference in our openness to work with others.   No one has a monopoly on wisdom and we can learn from one another. There should be no reason why we can’t still work together where there is common ground. And there is still plenty to work with.

Together we face a Government that is dismantling our social security, privatising our NHS, and ignoring the threat of climate change.  A Prime Minister intent on turning back the clock to an age of inequality for school children and insecurity for people in work.  And all this in the context of leaving the European Union, the terms of which will impact the whole country for decades.

Never has the need for an effective opposition been so great.  So our offer to Jeremy Corbyn is this: We are different, but let’s work together where there is agreement.  Let’s look too at how we can shape the future of Britain together.  And in particular let’s look urgently at how progressive parties can work together to crack open the broken political system once and for all.

Together we are staring down the barrel of Conservative rule for decades to come.  Our responses will affect generations to come.  Let’s make the right ones for everyone.

Jonathan Bartley is co-leader of the Green Party

4 Responses to “With Labour in disarray, the Greens have a more important role than ever”