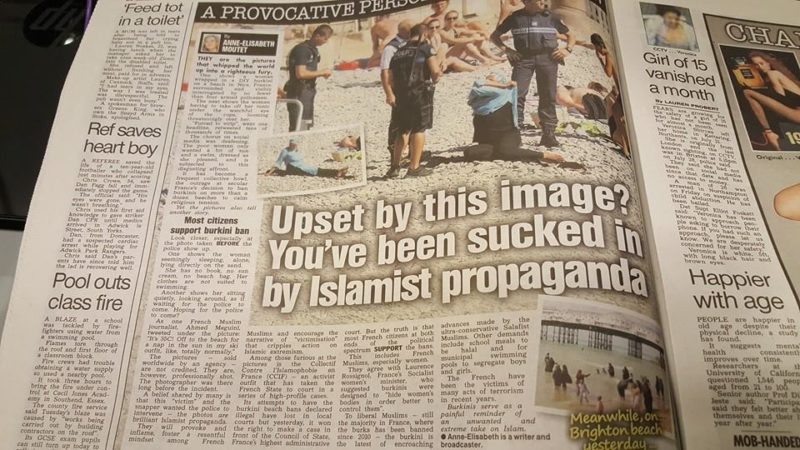 If a photograph of a woman in France being surrounded by armed policemen forcing her to remove her clothes made you feel outrage, then you’ve been ‘sucked in by Islamist propaganda’, argued Ann-Elisabeth Moutet in yesterdays Sun.

This is presumably because the woman in the picture is visibly Muslim. This is what happens when you start viewing Muslims as an Islamist threat, rather than as human beings.

The Sun article is a response to the story about a 34-year-old Muslim woman humiliated and fined for wearing a ‘DIY burkini’ on the beach – not even an actual burkini, an article of clothing banned in some parts of France for being against ‘good morals and secularism’.

France has deemed the Burkini ban ‘necessary, appropriate and proportionate’ to maintain public order. Seemingly, this ban has now been extended to include bright turquoise tunics and headscarves.

Some members of the public on the beach watching the incident reportedly felt so emboldened by the actions of the police, they started shouting abuse at the woman, telling her to ‘go home’ and that she wasn’t wanted there.

Clearly, the police felt that these people sporting government-approved beachwear posed no threat to public order.

The author argues that this was quite possibly a publicity stunt. The woman knew exactly what she was doing, lying there, on the beach, directly in the sun, doing absolutely nothing, wearing clothes (not even the banned burkini) and waiting for the police to approach her.

Even if this is the case, and I believe it could be, it proves one thing for sure: a visibly Muslim woman is for some an agitation in herself – she need not do or say a thing.

Further, having taken away the option for Muslim women who choose or feel obligated to cover to be able to wear clothing specifically designed for the beach, it is now apparently intolerable for Muslim women to find other means of covering up (such as a turquoise tunic) – driving them off the beach completely.

You do not have to agree with or support religion-based modesty codes to understand that for some Muslim women, very real distress is felt at even the thought of not being fully covered, let alone the possibility of being surrounded by men and being told to remove clothes.

For them, the burkini is a means of being able to join in with social activities, with friends and family, and society without having to feel they are exposing themselves. They would rather forgo coming out than be in public uncovered.

And as someone who was pressured to wear hijab for a number of years, I know that if they were banned off the beach, that would have been the end of beach trips for me.

So if the argument is to liberate women, it’s a weak one.

Harmful modesty doctrines designed to maintain control over women’s bodies cannot be effectively challenged by making it impossible for the women most at risk to engage with the rest of society.

Of course, there is also another section of women who are also impacted: Muslim women who just want to cover as a non-Muslim women might.

Islamists have politicised women’s bodies and clothing and now the French are following suit, also restricting the rights of Muslim women to dress themselves in a way they see fit.

Islamists for years and even more so in recent times have been pushing the notion that it is impossible to be Muslim and part of western society at the same time. Far right extremists will have you believe the same.

So if this Sun article is correct in its assertion that most of France supports the ban, it is those who cannot look at a visibly Muslim woman without seeing an Islamist threat who have been ‘sucked in by Islamist propaganda’ – and far right propaganda to boot.

The rest of us are simply expressing horror that in a liberal, democratic, enlightened country, women are being forced to undress in public because some us don’t like what they are wearing.

Yasmin Weaver is project manager at Inspire, a gender equality and counter-extremism organisation based in the UK