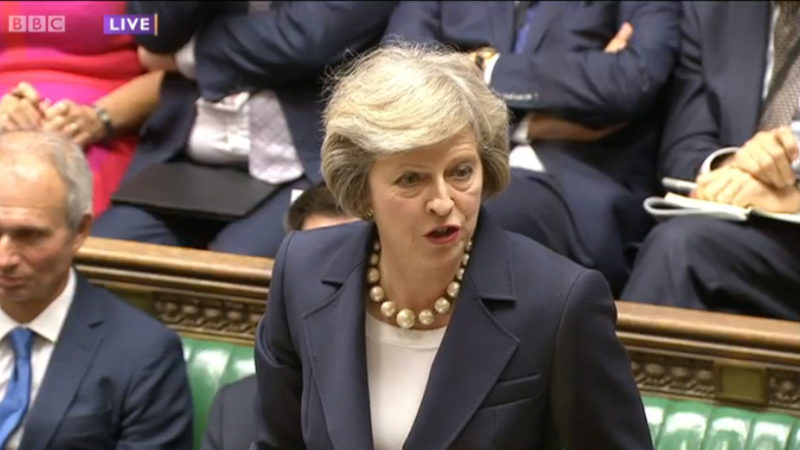 It is well known that economic growth has still been excessively reliant on households, despite the unprecedented falls in real earnings of recent years.

Today the Trades Union Congress publishes analysis that shows just how heavy pressures on some households have become.

The Britain in the Red report, by Damon Gibbons of the Centre for Responsible Credit, shows 1.6 million households are in ‘extreme problem debt’ – defined as paying more than 40 per cent of their gross income on unsecured debt payments.

Most worryingly, extreme problem debt is rising particularly quickly for low income households that are in work.

These pressures do not come as the result of an explosive rise in household spending. Over the years after the financial crisis, households have had to retrench. But while consumer spending has slowed, household incomes have slowed by even more: 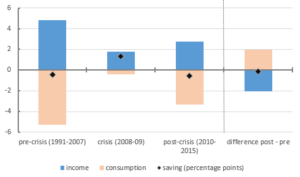 (Annual average change in household income, spending and saving, as a percentage)

The net effect is that saving, defined as the difference between income and consumption, continues to fall – in fact at a marginally faster pace after the crisis than before.

The exception was the crisis itself, when consumption slowed much more sharply relative to income.

In terms of debt: households took on increasing level of unsecured debt (mainly consumer credit) ahead of the financial crisis.

Over the main years of the crisis, debt levels were reduced. In the post-crisis period improvements in debt levels broadly ceased, and in the latest couple of years, unsecured debts have been on the rise again.

The chart below illustrates these movements through a debt to income ratio (green line on the right scale), with also the annual change in the ratio (black diamond) split between the change in debt (yellow column) and the change in income (blue column): 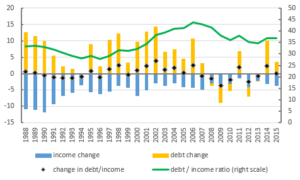 (Debt to income ratio and annual change, as a percentage)

(NB. for ease I have used Office for Budgetary Responsibility definitions for unsecured debts here and the ONS measure of household disposable income; the analysis in the report is based on more refined measures of debt – though the conclusions are consistent.)

It is clear that in the latest two years households have reverted to taking on more debt.

Separate Bank of England figures show consumer credit growth of ten per cent, the highest rate for over a decade.

While the latest figure on the chart has the increase in debt moderated by a higher income figure, this reflected the modest acceleration in wages of 2015. Since then, wage growth has slowed again.

As the problem debt figures indicate, households cannot afford another expansion of consumer debt. The report makes a number of recommendations for easing the burden on those already under heavy pressure.

But these apart, the real need is for a stronger economy that will permit a material and sustainable revival in wages and income that will support household spending.

The pressures on the economy and households can be reduced through a reversal of the government approach, not least through a major revival in infrastructure spending.

Geoff Tily is Chief Economist for the Trades Union Congress

See: People don’t have money to spend – and the government won’t act

3 Responses to “Want to help 1.6 million households in extreme debt? Raise their incomes”