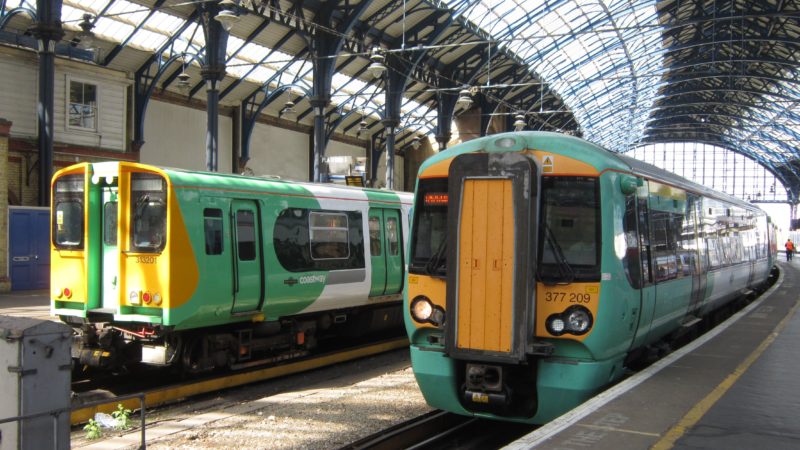 As rail unions begin a week of strikes over Southern Rail’s plans for driver-only trains, scrapping the conductor/guard as a ‘critical safety’ role, the Times knows where it stands.

Today’s leader column puts the blame squarely on ‘a campaign of disruption and harassment’ by the rail union RMT, denouncing union ‘Luddism’ for opposing Southern Rail’s mean and dangerous cutbacks.

(If you don’t believe downgrading or abolishing conductor/guards is dangerous, imagine someone falling ill on the train or getting stuck in the doors, and the only member of staff on board is the driver.)

The Times dismisses these concerns, pinning the whole dispute on the union’s lust for power:

‘The real issue for the union is keeping jobs that are redundant, entrenching union power and putting all rail companies on notice that the RMT has no intention of letting the train operators introduce reforms that do away with old and restrictive practices. It is pure old-fashioned Luddism.’

Today’s rail staff are simply opposing ‘reforms’ that would scrap important (not ‘redundant’) jobs, replace these with no technology whatsoever, and thereby increase the workload of existing staff who are busy driving trains.

The ‘restrictive practice’ Southern Rail is looking to ‘do away with’ is, er, the division of labour, which didn’t strike Adam Smith, hero of the free marketeers at the Times, as terribly restrictive.

The paper goes further though, complaining that Southern has done too little to crush the RMT:

‘Southern’s response, however, has been lamentable. Believing that it has quiet government encouragement to take a tough line against a militant, politicised and self-serving union, it has proved incapable of fighting a long war of attrition. […]

Facing down the RMT was always going to be inevitable. It is a pity that Southern has proved so ham-fisted in doing so.’

The Times still has a reputation as being more objective than its shouty neighbours on the newsstands.

It’s worth noting then how heavily the paper’s editorial comes down on the side of a business it acknowledges provides a service ‘among the country’s worst’ against a democratic strike in favour of passenger safety.

(This editorial position is reflected in its news coverage of today’s strike.)

The Times even admits the success of the union campaign, noting that ‘public fury has fallen on [Southern’s] management and not on [RMT] members’.

So we have passengers and rail staff on one side, and Southern Rail and the Times on the other. Tell us again about how newspapers reflect the views of their readers?