Why can't the NHS help everyone? 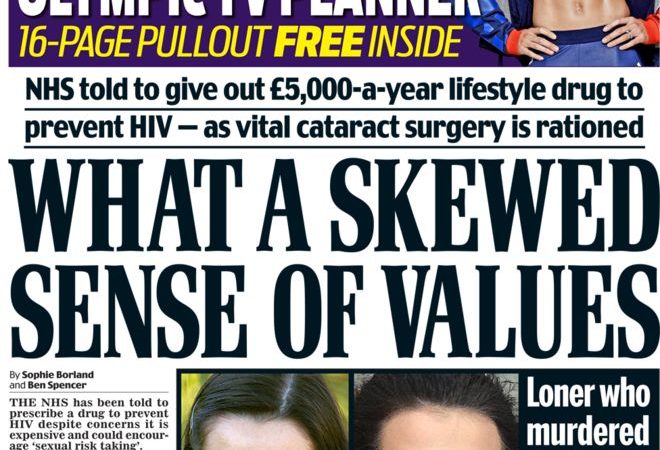 You would think news that a drug with a 92 per cent success rate in preventing HIV being available on the NHS would be welcome.

But not to the Daily Mail, which this morning pits sick patients against each other and recycles homophobic stereotypes to frighten its permanently panicked readership. 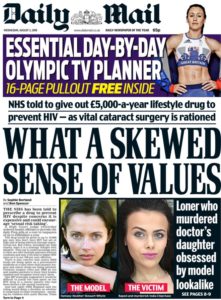 Under the headline ‘What a skewed sense of values’, the Mail leads on ‘concerns’ that NHS funding for the drug could mean less money for cataracts surgery and other treatments.

Given that the high court decision that the NHS can and should provide the drug, called PrEP, was welcomed by every relevant charity, to whom does the Mail attribute these ‘concerns’?

First is one line from an AIDS charity based in, er, the United States, (quite a long way to go for a quote), which, given the Mail’s usual form with out-of-context quotes, should be taken with a bowl of salt.

The second is Conservative MP Philip Davis, who has a record of consistently voting against gay rights, including the Equality Act and same-sex marriage. This of course has nothing to do with his opposing NHS funds for a drug which disproportionately helps gay men.

So what’s the Mail’s argument? If the scare headlines about this ‘£5,000-a-year lifestyle drug’, (or as the MailOnline version has it, a ‘promiscuity pill’), are too opaque, the paper’s leader column spells it out:

‘At a time when vulnerable elderly patients are denied routine but life-changing cataract operations, yesterday’s High Court ruling that the NHS should fund an expensive new treatment which reduces the chances of a healthy person contracting HIV from unprotected sex, is deeply disturbing.’

‘But is it unfashionably moralistic to ask whether this is not just a lifestyle drug for gay men not willing to take the reasonable precaution of using condoms, which are available for just a few pounds and a more effective barrier against a raft of sexually transmitted diseases including HIV?’

Now, first on this ‘promiscuous lifestyle’ point: one of the benefits of this treatment is it means partners of people with HIV – who might well have a middle-class, Daily Mail, family ‘lifestyle’, including (gasp) children – will be able to safely have sex without condoms.

Further, more than half of the 100,000 people in Britain living with HIV are heterosexual, (54,000) – a reminder, if one was needed, that having lots of sex, sometimes without a condom, is not a ‘lifestyle’ restricted to gay men.

On the money, its true NHS England has said local councils should fund the drug, or else force the NHS to make ‘difficult decisions’, (to use a phrase from our last Prime Minister). The Times has also run with this today, though it leads on ‘children with cystic fibrosis’ rather than elderly people with cataracts.

Of course NHS England is concerned about this – that’s why there was a high court battle in the first place.

It could be argued, given the cost of a lifetime of HIV treatment, that the drugs will actually save public money in the long run.

But wait, why is the NHS having to choose between potentially life-saving, and certainly life-improving, treatments? And why are local councils unable to foot the bill instead?

Could it be those ‘difficult decisions’ again, also known as the massive cuts to local council budgets and mismanagement of the NHS by our Tory government, cheered on by the Daily Mail?

Surely the NHS should be able to protect against the spread of HIV as well as treat cataracts and cystic fibrosis? And if it can’t, the government has a moral responsibility to give it enough money so that it bloody well can.

That is surely where the discussion should be. Instead we have the Daily Mail pitting sick patients against each other and rehashing the old ‘lifestyle’ homophobia of the 1980s, when the AIDS crisis was blamed on its victims, ‘irresponsible’ gay men who were being punished for their sins.

This is a disgusting libel and has no place in modern debates around public health. Sick people deserve treatment, and should not be punished for their sexuality by a government responsible for their health and welfare. It would be nice if the press recognised this.

MediaWatch is Left Foot Forward’s progressive take on the press and broadcast media.