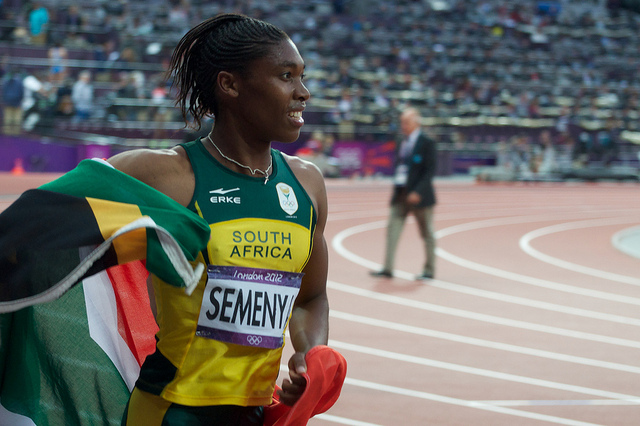 On Sunday, the South African athlete Caster Semenya will almost certainly win the women’s 800m event in Rio, and is tipped to break the world record.

And while you’ll hear plenty about her ‘unfair advantage’ — she has unusually high testosterone levels — it’s difficult to imagine an athlete who has had to fight harder or overcome more than Semenya has.

Since she won the World Championships in 2009, at 18, Semenya has been hounded on the question of her gender by media outlets around the world; she has had intimate information about her body leaked and published; she’s been subjected to highly invasive ‘gender verification’ tests — as though her hormones were illegal drugs — and for a time she underwent chemical treament to suppress her testosterone levels in order to be allowed to compete.

This concern over Semenya’s physiology is strange, as feminist commentators have pointed out, because almost all great athletes are great because of physical abnormalities.

Michael Phelps has unusually long arms and large feet; Usain Bolt has an extraordinarily high density of fast-twitch muscle fibres; Paula Radcliffe’s VO2 max (the maximum volume of oxygen an athlete can use) was higher than almost any other female athlete’s.

No one has managed to explain why elevated testosterone levels in women should be treated differently to any other innate physical advantage.

Indeed, it seems that sporting grandees simply have a fixed, normative idea of what a woman should be, and Semenya’s speed and power threatens those norms.

However, she can take part in Rio, without hormone suppression, thanks to another hyperandrogenic athlete, Dutee Chand, who won a case against the International Association of Athletics Federations (IAAF), arguing that the upper testosterone limit was discriminatory.

But yet again, Semenya is the focus of a sordid media storm, in which commentators try to explain that their problem with her is nothing to do with gender, justice or human rights. It’s simply about fairness.

Take Malcolm Gladwell, author and widely respected intellectual, who, in an interview with the New Yorker, was asked if Semenya should be allowed to compete as a woman. He responded with the following:

“Of course not! And why do I say of course not? Because not a single track-and-field fan that I’m aware of disagrees with me. I cannot tell you how many arguments I’ve gotten into over the past two weeks about this, and I’ve been astonished at how many people fail to appreciate the athletic significance of this. Remember, this is a competitive issue, not a human-rights issue. No one is saying that Semenya isn’t a woman, a human being, and an individual deserving of our full respect.”

The distinction Gladwell draws between ‘a human rights issue’ and ‘a competitive issue’ is quite remarkable. Imagine we applied it to a professional sector other than sport — say, a sweat shop owner claiming his abuse of workers was not a human rights issue but an efficiency issue.

The point of human rights is their universality, and the fact that they cannot, or at least should not, be superseded by any other concern.

When the IAAF inscribes and reinscribes its gender policing regulations — while fully aware of the trauma and prejudice it will force athletes to endure — the message it sends to the world is that so-called fair competition is more important than the rights and wellbeing of athletes.

Sport, and particularly the Olympics, is about celebrating and respecting achievement, and bringing people together in solidarity.

If sporting authorities believe that an abstract idea of competition is more important than the rights and dignity of the athletes, then sport has lost its way and lost its purpose.

If Semenya wins on Sunday, she will once again face the gender police, both in the world media and in her own sport.

Her success will be used not as an example of what athletes can achieve in the face of adversity, but as an argument for tightening the definition of what it is to be a woman, as a justification for subjecting other athletes to the kind of humiliating treatment she has suffered.

If that’s what we call fair, then I’m done with fairness.