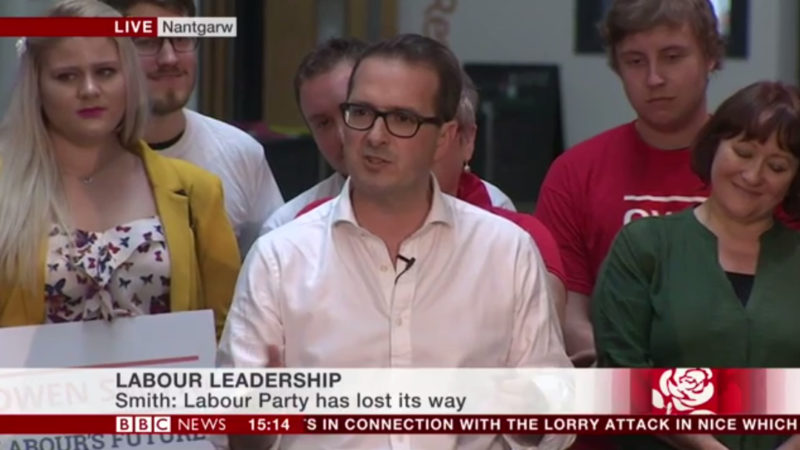 Owen Smith MP gave a rousing speech yesterday about the blight of inequality as he launched his bid to lead the Labour Party.

Smith gave us lots of policy to chew on, most notably his ‘British New Deal’ – a £200 billion development fund ‘to rebuild physical and social infrastructure’.

Laying out what this means, Smith said:

‘I want new hospitals, I want better roads, I want us to restore Sure Start centres, I want us to make sure we’ve got the rail infrastructure we need, I want us to be certain that every child has a chance to go to college or take an apprenticeship.’

The former shadow Work and Pensions Secretary is clearly running as a Left populist in the style of Bernie Sanders or Elizabeth Warren in the United States. (The idea of a New Deal is itself borrowed from President Roosevelt’s depression-era radicalism.) At one point Smith remarked:

This is manifest in his other policies, such as re-writing Clause IV of Labour’s constitution ‘to put tackling inequality right at the heart of everything we do’.

‘We have a wider gap between the haves and have-nots in this country than any of us have known in our lifetimes. And it is for the Labour Party, our party, to fight to reduce that gap. […]

‘Every Labour policy has to be tested against that benchmark. Is it going to reduce inequalities in wealth, in power, in outcomes and opportunities, or is it not?’

He also trashed Theresa May’s decision to scrap the Department for Energy and Climate Change, and promised to instantly restore the DECC, and make ‘every single department across government’ work towards a ‘low-carbon future’.

On foreign policy, Smith proposed a ‘war powers act’ as a check against the mistakes of the Iraq War, as laid bare in the Chilcot report, with greater oversight by parliament.

(Smith was not an MP in 2003, but says he opposed the Iraq War at the time. He has voted for military action since, in Libya, Iraq and Syria.)

On a more general level, Smith praised current leader Jeremy Corbyn for putting opposition to austerity (cuts to public services) on the table, but said Labour must go further:

‘It’s not enough to just be anti-austerity. You’ve got to be pro- something. And I am very clear. I am pro-prosperity. I am pro- standing up for working people.’

Billing himself as a ‘radical and credible’ candidate, Smith has also hinted at more radical proposals. When asked after his speech about rail nationalisation, he replied:

“I would re-nationalise our railways tomorrow” #Owen2016

And in an interview with Andrew Marr yesterday, in response to the ultimate ‘gotcha’ question for a Lefty – would you raise taxes on the rich? – he said:

‘Yes. One of the things we’ve been far too timid about in the Labour Party for a long time is out taxation system. It isn’t progressive. […]

Certainly I’d go back to a 50p rate tomorrow [for top earners], because I think that is absolutely the right thing to do.

But there are other elements of taxation – why on earth are capital gains being taxed at 20 per cent, when the highest rates of income tax are at 45 per cent?’

In the same interview, Smith hedged his bets on Brexit, keeping open the possibility of campaigning against enacting Article 50 of the Lisbon Treaty, which would effectively block Britain from leaving the EU.

He also said he favoured replacing Trident as part of a multilateral effort for global disarmament, (rather than the CND’s unilateralist position, which he doesn’t think will work), adding, when asked, that a PM must be willing to use nuclear weapons as a last resort to have a serious deterrent.

At his launch event, Smith also spoke against any split in the Labour Party, saying:

‘If I’ve got anything to do about it, never on my watch will this party split. […]