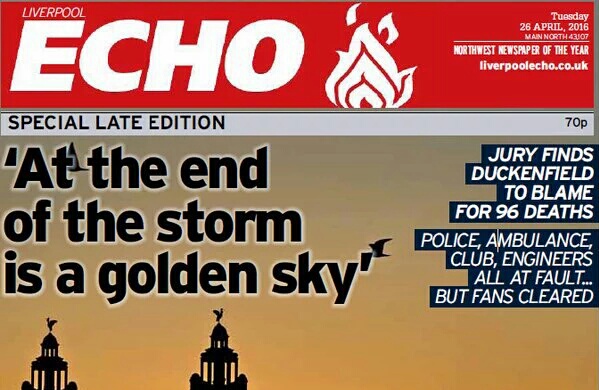 Special edition of the Liverpool Echo published to mark the verdicts

Today, as Lord Justice Goldring read out the verdicts that completely vindicated their decades-long fight for justice, the families of the 96 football fans who perished at Hillsborough on 15 April 1989 broke down in tears. They have been waiting 27 years.

After enduring smears from media, politicians and even some football fans, the families now have official acknowledgement of something that they always knew was true: the Hillsborough disaster was caused by negligence on the part of those entrusted with ensuring the welfare of their loved ones.

But even more than that, the families have been vindicated in their belief that there was a cover-up of the facts of the disaster, a cover-up that painted their loved ones as hooligans, drunks and thieves.

It’s hard now to imagine, in the bright lights of the Premier League era, how this fight could have been drawn out for so long, taking such a toll on ordinary people who had no prior experience of activism, of legal battles or of building political pressure.

The verdict shines a light on the toxic classism that allowed South Yorkshire Police to avoid blame while smearing victims of a sport that had been described by the Sunday Times in 1985 as ‘a slum sport watched by slum people in slum stadiums’.

It exposes the laziness and callousness of certain parts of the media, preferring to blame supporters than challenge the official line.

It reminds us that many in the political establishment demonstrated a deep disregard for the city of Liverpool— the extremely offensive official reply from Bernard Ingham was just the tip of the iceberg. 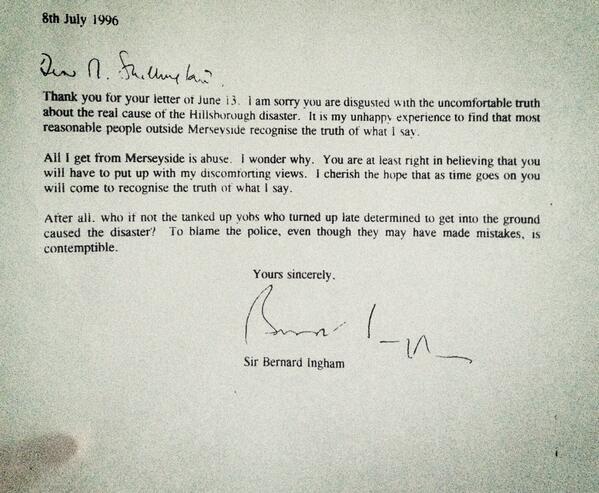 This success is an amazing credit to a community that refused to be beaten, even when faced with seemingly never-ending snubs from the establishment.

This success is a credit to the power of grassroots activism and the enduring power of a city coming together to fight injustice.

The Hillsborough Justice Campaign—a group of true heroes like Margaret Aspinall and  Anne Williams—have taken on police, the government and the media — and have emerged with the truth.

Liverpool Football Club, which supported the families from the start, embraced the cause entirely, with a succession of players and officials heavily involved in supporting the campaign.

Kenny Dalglish, Steven Gerrard (whose cousin Jon-Paul Gilhooley died at Hillsborough), Rafael Benitez— the list of supporters is long and star-studded. Even departed manager Brendan Rodgers was at the last Hillsborough Commemoration, a sign of the seriousness with which all at the club took the campaign.

Phil Scraton, a criminologist and scholar from Queen’s University Belfast, put in tireless work to pick apart the official Hillsborough narrative, and has had that work vindicated.

Throughout the past 27 years, the people of Liverpool have stood united in an oftentimes lonely crusade against injustice. Between their ongoing boycott of The Sun—whose infamous and disgusting ‘The Truth’ front-page has now been entirely rebutted—their continued displays and calls for justice at matches, and the support from Everton FC and their fans, the people of Liverpool rallied together to exonerate their own.

We salute the Hillsborough families and their total vindication as Fighters for Justice. pic.twitter.com/rojHHOySJ3

The hurt that the people of Liverpool felt was never more clear than in 2009, when fans booed the then Culture Secretary Andy Burnham at the 20th anniversary commemoration of the disaster. It was that communal display of grief and anger that spurred Burnham to fight for a re-examination of the Hillsborough Disaster, leading to the Hillsborough Independent Panel and eventually the inquests that today vindicated the 96.

But these are just a few selected figures who helped lead to the final unveiling of the truth. The hundreds of thousands who sang ‘Justice For The 96’ on the Kop, bought Hillsborough Justice Campaign badges or stickers, signed petitions, waved banners or gave the families support from all over the world are a part of the story too.

The inquest’s findings will never bring back the 96 innocent people who died at Hillsborough, or make up for the hurt caused to their families, but it will at least, hopefully, end the slander of their good names.

And the inspirational lead of the Hillsborough families, the support of the entire city of Liverpool and the tenacity of the campaigners shows that a people united will never be defeated.

David Hartery is a writer from Waterford, Ireland and a life-long Liverpool fan. Find him on Twitter.