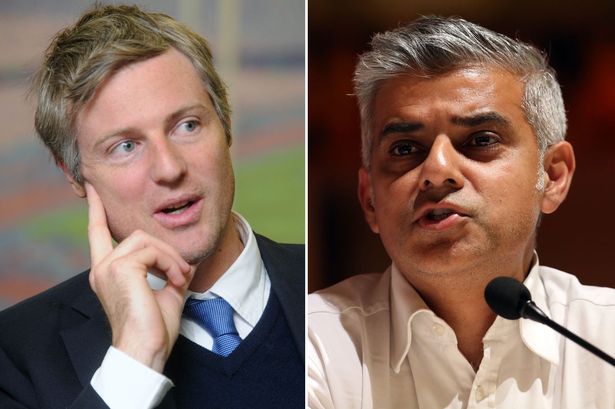 A survey by YouGov on the London Mayoral candidates – which showed a massive lead for Khan – found 16 per cent of Londoners felt the assertion ‘will tackle Islamic extremism’ applied to Khan, versus 13 per cent for Goldsmith.

Respondents said the term ‘divisive’ applied more to Goldsmith than to Khan, by 18 per cent to 13.

While these margins are slim, they are at odds with what you might expect, given Goldsmith’s making ‘extremism’ the dominant issue in this election. 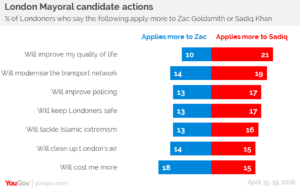 It comes as the poll finds a 20 point lead for Khan when second preferences were included, predicting a win by 60 per cent to Goldsmith’s 40 if the vote were held today. 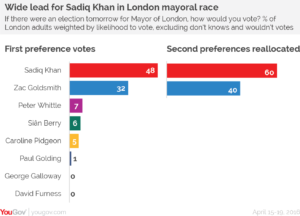 As it stands, Khan is ahead on first preference votes by 48 to 32 per cent.

When YouGov weighted its results to take into account ‘don’t knows’ and intention to vote, Khan’s polling has been consistent at around 30 per cent from January to today. But Goldmsith polling has fluctuated, and is currently lower than it was at the start of the year. 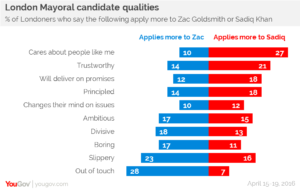 Since the YouGov poll was commissioned by the Zac-friendly Evening Standard, it will be interesting to see how they cover the poll in today’s print edition. Their current web headline reads: ‘Zac Goldsmith has mountain to climb as Sadiq Khan stretches poll lead’, which is a curious way of putting things.

Meanwhile, Respect Party candidate George Galloway, who has scored upsets against Labour in east London and Bradford in the past, is currently polling at 0 per cent, behind the neo-fascist party Britain First.