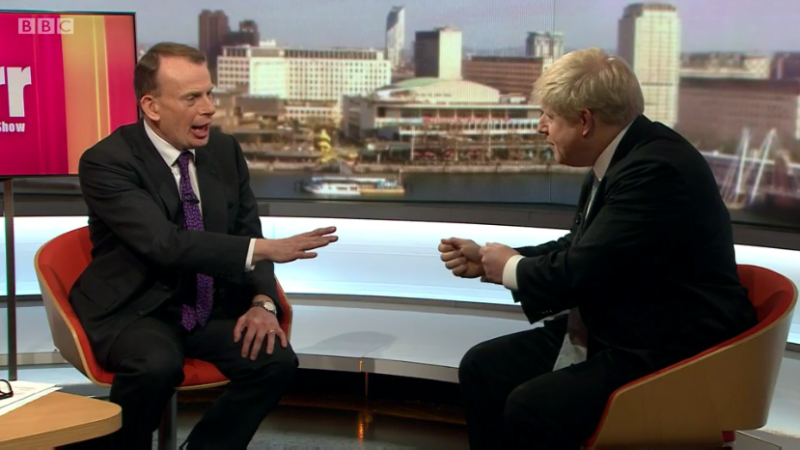 Since coming off the fence a fortnight ago, Boris Johnson has trumpeted his decades of experience writing and thinking about the European Union.

Rather unfortunate, then, that he failed to demonstrate his expertise when faced with an on-form Andrew Marr who refused to accommodate Johnson’s trademark ‘wall of noise’ interview technique. Instead, as the Sun’s Trevor Kavanagh put it, he disappeared into ‘a ‘cloud of waffle’.

To those saying I interrupted BJ too much… It felt like being a fly heckling a steamroller, or twig trying to intervene with a waterfall

The Remain campaign will undoubtedly have been taking notes from Marr on how to destabilise the most popular voice of the Leave campaign.

The key lesson is that in every debate Leavers should be diverted from their core messages —taking back control, resisting to Project Fear—with rigorous questions on the substance of their campaign.

Johnson tried to start the interview with a personal account of how he reached his final stance on the referendum, the kind of personal narrative he deploys with great effect, but Marr veered in a dramatically different direction.

BJ: And I’ll tell you, I’ll describe if you want my – the journey that led me to this conclusion.

AM:  We will come to that but…I want to clear up exactly what you think and want to happen now, because relatively recently you were arguing that we could have a referendum. We could vote to leave, they would be so panicked and shocked we would then get a much better deal and we could then stay in.

From there, Johnson floundered. He could not make a crisp compelling case on a potential free trade deal, could not respond adequately to the previous interview with German Finance Minister Wolfgang Schauble, stumbled through an answer on the triggering of Article 50 and conceded that there could be job losses post-Brexit.

A key moment in the interview came when Johnson finally whipped out the simplistic metaphor he had prepared earlier:

Do you know what this is like? This is like – this is like a – the jailer has accidentally left the door of the jail open and people can see the sunlit land beyond and everybody’s suddenly wrangling about the terrors of the world outside. Actually it will be wonderful.”

In isolation, this is the kind of flowery image that Johnson deploys to great effect. But this time it rang hollow, a clear obfuscation in the midst of a policy-based discussion. This demonstrates the importance of not allowing the Mayor of London to take control of the discussion, or allowing him a springboard for his blue-sky messages.

Anyone likely to face Johnson in debate over the next few months needs to figure out, as Marr has, how to be the fly that successful heckles the steamroller.