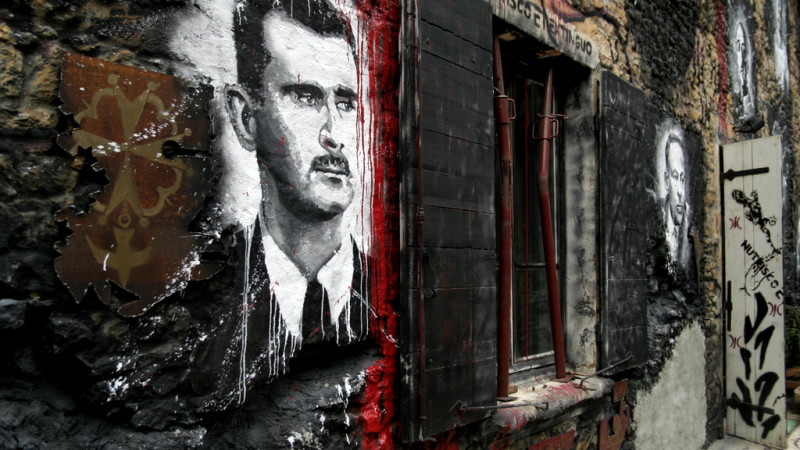 The ancient city of Palmyra and the inhabited adjoining town of Tadmor was conquered by the armed forces of Bashar al-Assad’s regime and a consortium of foreign Shi’a jihadists, some of them designated terrorist organizations, and all of them led by the Quds Force, the external operations wing of Iran’s Islamic Revolutionary Guard Corps (IRGC), itself a listed terrorist entity.

While the takeover of Palmyra by the Islamic State (IS) in May 2015 was considered by almost everybody a negative development, the pro-Assad coalition’s capture of the city under the cover of 900 indiscriminate Russian airstrikes has been called “a good thing” by no less an authority than the United States Department of Defence. It was little surprise among that Robert Fisk echoed this sentiment; it was more surprising that Boris Johnson did.

The basic case for regarding Palmyra’s fall to the pro-Assad coalition as a positive development is that, to quote Johnson, ‘no matter how repulsive the Assad regime may be … their opponents in [IS] are far, far worse,’ and this defeat for IS moves Syria closer to peace.

There is nothing in this formulation that stands up to scrutiny.

First, the notion of Assad as the ‘lesser evil’ in Syria—apart from the mistaken idea that the regime didn’t destroy or loot Palmyra’s treasures—seems to be based solely on the regime and its Iranian and Russian backers not exhibiting their atrocities on high-quality audio-visual.

The United Nations recently documented the evidence of the regime committing extermination, rape, and five other crimes against humanity as part of a ‘systematic and widespread attack against [the Syrian] civilian population.’

Defectors have shown to the outside world the use of torture and starvation to murder at least 11,000 prisoners, while perhaps as many as 200,000 more languish in regime prisons.

An estimated 470,000 people have been killed in Syria and more than ten million displaced, with the Assad regime responsible for nearly ten times more civilians being killed than IS and the regime using displacement as a military strategy while IS does the reverse (a version of settler-colonialism).

There is no individual cruelty IS has committed, from sexual violence to immolation, that the regime has not at least matched and usually exceeded. There is nothing to celebrate in the expansion of the territory the Assad regime is able to terrorize.

Second, the notion of the Assad regime as an ‘opponent’ of IS is in need of very serious qualification. Yes, in the long term Assad intends to defeat IS; the two are not ‘friends’ or ‘allies’.

But in the short- and even medium-term both Assad and IS share a strategic aim: to eliminate all alternatives—namely the moderate opposition—to face Syria, the region, and the world with a binary choice of Assad or IS.

Provocation or provokatsiya, as the Russians—who perfected the tactic—call it ‘simply means taking control of your enemies in secret and encouraging them to do things that discredit them and help you,’ as John Schindler, a former counter-intelligence officer with the National Security Agency, explains.

In Syria, this meant the regime, by commission and omission, building up Islamist extremists within the insurgency to buttress the claim Damascus made at the outset of the uprising: they were faced with a terrorist revolt.

Eleven days into the uprising in March 2011, Assad released nearly 250 Islamist prisoners from the infamous Sednaya. Two further amnesties to jihadis and Islamists were given in May and June 2011, while the regime widened the violent crackdown on the protest movement.

‘In conjunction with the terrorist-release policy, Assad was sure to imprison diverse, non-violent, and pro-reform activists by the thousands … [and] displace[d] civilians so that the influence of extremists would fill their absence,’ a senior regime defector, Bassam Barabandi, later explained.

It was from these prisoners and the secret delegation that IS would form its Syrian wing, Jabhat an-Nusra, in late 2011. (Nusra eventually split from its parent organization and is now al-Qaeda’s official wing in Syria.)

The third component from which Nusra was formed in late 2011 was the large IS infrastructure on Syrian soil, specifically in the east that is now IS’s heartland, which was present because the Assad regime had previously hosted IS and used IS as part of its foreign policy.

From the beginning of the Western presence in Iraq in 2003, Assad was funnelling foreign fighters to IS’s predecessor, providing it shelter and strategic depth, and even providing medical treatment to injured IS jihadists.

The depth of the Assad regime’s complicity with IS was shown in two American court cases that found Assad liable for IS beheading two Americans in 2004 and bombing Jordan in 2005.

After IS announced itself in Syria in April 2013, Assad largely left it alone until the end of 2014. This was all the more notable since a key Assad war tactic was relentlessly bombing insurgent-held areas to prevent them setting up an attractive government that would stand in contrast to the dictatorship.

In the summer of 2014, Assad began token strikes on IS-held areas to try to insinuate himself into the then-nascent international coalition against IS.

Assad intended with those strikes—as he intends now with capture of Palmyra—to reap ‘a perverse harvest of the terrorist seeds he planted to quash the civilian-led reform movement,’ as Barabandi put it.

To allow Assad to present himself as a counter-terrorism partner is to agree to ignore fourteen years of history in which Assad was responsible, to one degree or another, for the murder of hundreds of Western soldiers and so many more Iraqis.

It is also to ignore the fact that IS might well not even exist now had Assad not so assiduously nurtured its growth to repress a popular revolution against autocracy.

Finally, the notion that the pro-Assad coalition taking Palmyra is a step toward peace is exactly wrong.

It was already true by the end of 2015 that the Russian intervention—which grievously wounded the mainstream rebels who are fighting both Assad and IS—had left the Assad regime simply too strong for any peace settlement to work.

With Palmyra’s fall, the incentive has been removed for the regime to negotiate and to accept the sine qua non of any possible political settlement, which Russia itself agreed to (before pretending it didn’t): the departure of Assad and his senior lieutenants.

There are around 100,000 rebels in Syria, plus the 12,000 or so al-Qaeda-aligned insurgents and the Islamic State. The rebels will never agree to a settlement that keeps Assad in place and will keep fighting.

The rebels initially took up arms to protect civilian demonstrators from the regime’s campaign of mass-homicide, and they know what awaits them if they lower their arms while Assad retains control of the State’s coercive apparatus.

While Assad remains, the rebels needed to sustainably defeat IS will continue to regard the government as their greatest threat and the enemy against which their primary focus is directed.

Any attempt to pressure the rebels into a settlement that leaves Assad in power by, for example, cutting off supplies, will further legitimize and entrench the extremists who will be the only ones left the population can turn to for self-defence against Assad.

The reality is that the extension of the Assad regime’s territorial control and its time in power guarantees only two things: more instability and more bloodshed.

5 Responses to “Comment: Assad taking Palmyra does not bring Syria closer to peace”