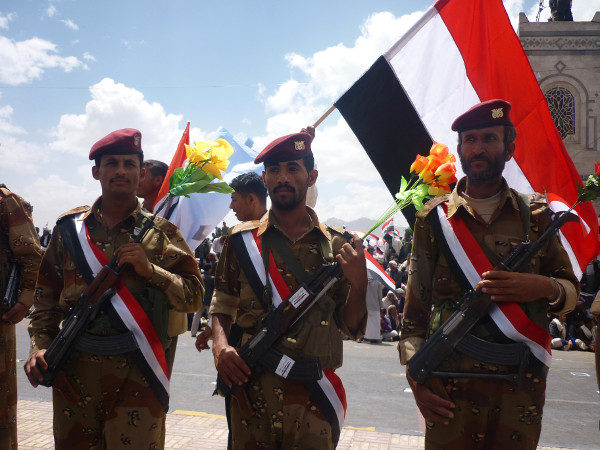 Thousands of civilians have been killed in Yemen since rival government factions began fighting in 2015, with the civilian death toll rising since the start of the Saudi-led intervention. According to Human Rights Watch, ‘the high civilian casualties in a number of attacks indicates that the coalition is not taking the necessary precautions to minimize civilian casualties’.

And, as Angus Robertson put it today, the Saudi air force has killed those civilians ‘using British-built planes, with pilots who are trained by British instructors, dropping British-made bombs, who are coordinated by the Saudis in the presence of British military advisors.’

The UK’s relationship with Saudi Arabia is troubling for many reasons – the country is one of the most oppressive places in the world for women, it uses crucifixion as a means of execution, it sentences people to death for ‘sorcery’ and ‘heresy’. That the UK denounces Iran, for example, but calls Saudi Arabia a friend, defies all logic. Still the the relationship shows no sign of thawing.

One might have hoped that the war in Yemen would push it to breaking point; instead it seems to be solidifying the friendship. According to rights groups Amnesty International and Saferworld, Britain sold more than £1bn worth of arms to Saudi Arabia in a three-month period last year, which coincided with a surge of Saudi airstrikes against Houthi rebels in Yemen. Sales in this period amounted to a staggering £1,066,216,510.

Indeed, Saudi Arabia was invited to peruse the lavish arms bazaar held in London last September, after a summer in which it had bombed a school along with other public buildings that were still in use. According to Amnesty International five air strikes were carried out on schools between August and October last year.

In response to the question today, David Cameron said:

“But yes – do we provide advice, help and training in order to make sure that countries actually do obey the norms of humanitarian law? Yes we do.”

That training doesn’t seem to be going very well. And at a time when Britain’s involvement in Middle Eastern wars is again in the spotlight, the PM should also offer immediate acknowledgement of this failure, as well as condemnation of the civilian death toll in Yemen.

It is worth pointing out that David Cameron and the right wing press make much of Jeremy Corbyn’s association with the likes of Hamas, yet turn a blind eye to the Conservatives’ friendship with – and actual, measurable support of – a regime which is at least as bad, and far, far more powerful. (In October the Telegraph published a front-page article by the Saudi ambassador accusing Corbyn of a ‘lack of respect’ for urging the UK to drop its prison deal with the kingdom.)

None of this is new. We all know that there’s hypocrisy in the government and that the UK/Saudi friendship is a relic which goes against everything our government claims to believe in. But what is happening in Yemen should really make us sit up, and bring a new urgency to the case for ending this alliance.

Angus Robertson should be applauded for bringing this issue into the spotlight, where it spends so little time. It’s undeniable that, while Labour is still struggling to sort out its position on intervention, Trident etc, the SNP is becoming an ever-louder and more harmonious voice in the campaign for ethics in arms trading.