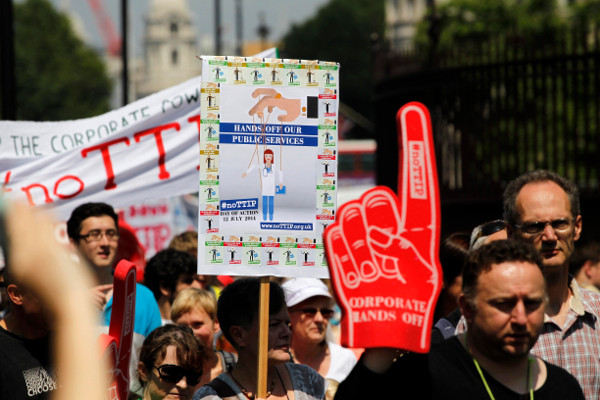 Huge corporations and the seriously wealthy will be the big winners from the controversial US-EU trade deal known as TTIP. That’s the implication of a new study which shows that billions of pounds have been won by giant companies like Mobil, EDF, Enron, Suez and Cargill, which have sued governments under similar treaties for taking action they believe to be ‘unfair’.

The most controversial element of TTIP is the ‘corporate court’ system, formally called ISDS. This system allows multinational corporations and other foreign ‘investors’ to sue governments for enacting regulation which damage their profits. Proponents argue that this offers investors, like small business, protection against ‘arbitrary’ government action.

But such corporate courts already exist in numerous other agreements and have allowed corporations to take action against many developing countries for freezing water and electricity prices, raising the minimum wage, introducing a sugar tax and putting health warnings on cigarette packages.

Gus van Harten’s new report shows that the really big winners of these cases are, unsurprisingly, really big corporations (over $1 billion in annual revenue) and super rich individuals (over $100 million wealth). Almost 95 per cent of all compensation awarded in the corporate court cases studied went to these groups.

This means, as has often big argued, corporate courts act to redistribute income from the public purse to the richest people in the world. $6.7 billion has been won in 48 cases, with another $1 billion being won by super rich individuals. While smaller companies and investors do sometimes take action, the report suggests that any winnings on their part  is normally wiped out by the legal costs.

In fact, the biggest sums have been won by well-known extractive and energy companies – with Occidental, Mobil, EDF, BG Group, Enron and Chevron winning cases, especially against countries like Ecuador, Venezuela and Argentina.

Interestingly the biggest such case in history – $50 billion awarded against Russia – has been dealt with separately because of its size. Van Harten suggests that this case was essentially won by Russian oligarchs using a series of European tax havens, including the Isle of Man.

Another big winner is what van Harten terms the ‘ISDS legal industry’ – including a selection of corporate law firms – which has made an incredible $1.7 billion in over 214 cases. Perhaps this shouldn’t be surprising, given a Friends of the Earth report from last year which showed that legal costs for such ISDS cases average over $8 million, exceeding $30 million in some cases, while 80 per cent of the legal costs end up in the pockets of the parties’ lawyers. Elite law firms can charge  $1,000 per hour, per lawyer.

The biggest losers of all, of course, is  public. In the cases studies by van Harten, $10 billion has haemorrhaged from the pockets of developing world governments. But this will only be the tip of the iceberg if TTIP and its sister agreements like CETA (the EU-Canada agreement) are agreed. After all, most cases to date have been won outside Europe and the USA. TTIP and CETA will open up far most lucrative cases up to far more business.

The idea that TTIP is about hard-done-by small business is clearly untrue. TTIP is a vehicle for channeling wealth from the public to the 1 per cent.

23 Responses to “Who will benefit from TTIP? Huge corporations and the super-rich”