One year on from the terrorist attack, Charlie Hebdo remains misunderstood 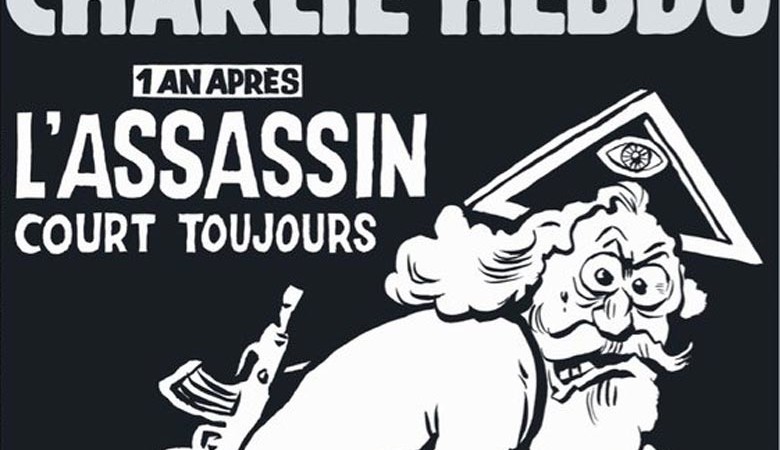 How can the drawing of an old, bearded man wearing a cloak stained with blood and carrying a Kalashnikov cause worldwide waves of outrage?

On Wednesday, Charlie Hebdo released its latest edition, marking the one-year anniversary of the attacks on the French satirical magazine. The cartoon on its cover was accompanied by the text: ‘One year on, the assassin is still out there.’ Judging by the reactions it has provoked so far, one year on, Charlie Hebdo is still misunderstood.

Charlie Hebdo is hated and condemned by many, but few of its loudest critics actually understand its cartoons. Debates that followed the Islamist attack that killed 12 people including most of the magazine’s journalists were revived for its one-year anniversary, suggesting many have not even read a single edition of the magazine in its entirety.

The most common misconception about Charlie Hebdo is that it attacks religious individuals. In fact, Charlie Hebdo is a political satire magazine. It does not attack any religion as a personal faith but ridicules every politicised and institutionalised form of it – be it the Vatican or the more extreme case of the Islamic State. Islam is not in the crosshairs; the ideology that exploits it, Islamism, is. 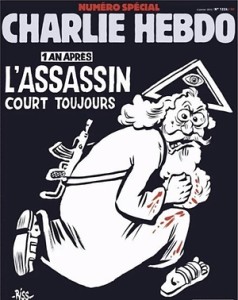 The latest example of this misinterpretation is the Vatican newspaper’s response to Charlie Hebdo’s latest cover, featuring the aforementioned old man; a gun-wielding terrorist with the religious symbol of the ‘all-seeing Eye of God’ hovering above his head.

The newspaper criticised Charlie Hebdo’s mockery of religion and accused the magazine of disrespecting believers’ faith in God. Last year, a few days after the Charlie Hebdo attacks, Pope Francis told journalists on his Asia tour: ‘To kill in the name of God is an absurdity.’ Charlie Hebdo agrees – in fact, this is precisely what the cartoonists have been trying to show in their latest absurdist cartoon of God as a terrorist.

Another example of indignant reactions, which have revealed an inaccurate and simplistic understanding of French satire, was the public outcry that followed the release of the Aylan Kurdi cartoon in September. Charlie Hebdo was accused of mocking the death of three-year-old Aylan Kurdi, a Kurdish Syrian who’s drowning became a symbol of the refugee crisis.

The drawing, which showed the little boy lying face down in the sand next to a McDonalds sign, was meant to depict the absurdity behind the tragedy: merciless Europeans living in peace, luxury and obesity while refugees silently die on their way to what they see as paradise. 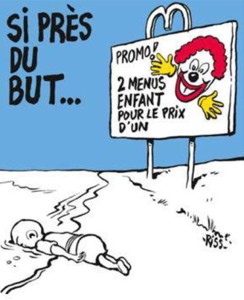 France has a long tradition of absurdist satire that dates back to before the French Revolution and uses deliberately provocative and uncensored images to get across its message. The single most defining characteristic of a satirical cartoon is precisely its visual exaggeration of human features and flaws. Without the blunt, uncut and crass nature of the drawings, they would not qualify as a caricature.

Furthermore, many people have confused absurdism with racism and unjustly labelled Charlie Hebdo as racist. One brief look at its website shows part of the magazine’s mission is to defend ‘a society free of racism’.

There is a profound difference between racist or anti-religious hate-speech and satirical cartoons. While the former attacks and incites hatred against ethnic, cultural and religious minorities, the latter mocks powerful elites which are henpecking societies and cultures, as well as the abstract concepts to which they adhere.

Power can come in many forms: political, commercial and religious. Charlie Hebdo’s favourite targets therefore reach from right-wing politicians and manifestations of capitalist doctrines to authorities of the two most popular and hence powerful religions on the planet: Christianity and Islam.

Literally every word that ends in ‘-phobic’ has been used to describe Charlie Hebdo. Yes, Charlie Hebdo might be many things – indecent, blasphemous and politically incorrect. But some things it is definitely not, namely, xenophobic, homophobic and Islamophobic.

Indeed, it has demonstrated the courage to stand up for the weakest and least privileged members of society by mocking the most powerful and thereby haling them to act.

We should commemorate these courageous cartoonists by daring to keep laughing and making people laugh, at everyone and everything. We should continue to draw, to write and to speak our minds.

And most importantly, we should never stop defending those who risk their lives fighting for these rights such as Salman Rushdie, Raif Badawi and Charlie Hebdo cartoonists. If you feel offended, fight back – but please do so with words, not with Kalashnikovs – and don’t insist that others share your offence.

Julia Ebner is a research assistant at Quilliam focussing on EU counter-extremism efforts. Follow her on Twitter.