We can learn much about the Daily Mail‘s business strategy from its recent appointments as star or guest columnists.

Professional wind-up merchant and failed reality-TV star Katie Hopkins recently jumped ship from the Sun – where she argued that ‘cockroach’ refugees should be left to drown – to the hallowed ground of the MailOnline.

Her voyage coincides with two editorials this week by fringe Marxist turned anti-PC warrior Brendan O’Neill, who fulminates in the Spectator about the evils of Left-wing politics.

On Wednesday he trained his guns on snooty TV comedians, (as deserving a target of a moral crusade as any other, I suppose, though their alleged contempt for ‘ordinary people’ might fall short of tax-evasion hero Viscount Rothermere’s…)

As Left Foot Forward has reported previously, O’Neill is a sort of up-market Hopkins – the thinking man’s Rod Liddle – whose schtick involves looking at what well-intentioned but silly people are saying and unloading with both barrels, or simply staking out the polar opposite position for the sake of internet traffic. (‘He’s all about those clicks, ’bout those clicks – no scruples…’)

Sometimes he’ll make a valid point in defence of free speech, for example, but this is incidental to his main position, which is that all modern politics Left of the terminal centre is mad, bad and dangerous. (Even his free speech work has its financial dimensions. As editor of website Spiked, O’Neill has secured thousands of pounds from the Joseph Rowntree Trust to catalogue free expression on campus.)

Today’s piece in the Mail is unremarkable in this context, except for its mainstreaming of a serious abuse of language.

In the closing paragraphs, discussing the hateful burning of Left-wing newspapers by some students at Cambridge and Goldsmiths Universities, O’Neill writes:

“The word ‘fascist’ must never be used lightly. But to destroy with fire words you don’t like? That is fascistic, and the very opposite of the freedom of thought that should prevail on 21st-century campuses.

As we have seen, the New Fascists, and the academic apologists who cave in to their censorious demands, frown on alternative thinking and seek to eradicate dissenting thought.”

Sadly, his phoney-reluctant use of the word allows the Mail to use it as lightly as a puffin feather, both in the headline of the piece and on its front page. 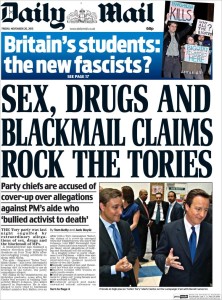 O’Neill is right to be cautious. As far back as 1944, George Orwell wrote in Tribune that the word ‘fascism’ had become little more than a swear word, (though he took the movement seriously enough to have nearly lost his life fighting it in Spain). Nevertheless, he wouldn’t have confused an outbreak of Mary Whitehouse-ism on campus with the boots of the Wehrmacht, and he was always certain of the nature of fascism as an a counterrevolutionary force on the side of big business and the boss class.

So while the no-platformers can try to impose their own petty tyranny on campus, (where do they find the time?), they are unlikely to secure the backing of the military, political parties or the church, nor the backing of any major capital.

What we have instead is a national newspaper with politics to the Right of the Tory government, owned by a millionaire aristocrat, accusing students and academics of representing the return of a movement the same newspaper supported when it was in the cradle.

It’s true the paper swung round to noisy support of the allies when the crunch came, but old habits die hard, and its coverage of migrants remains a standing disgrace. Just this week the paper ran a cartoon depicting refugees as the carriers of a plague of rats.

As with the paper’s recent branding of my friend Charlotte Proudman a ‘feminazi’ for the crime of highlighting sexism in the legal profession, the real power to vilify and silence remains where you might expect – in the hands of rich men and on the levers of cultural and political power.

The British tabloids are notorious around the world for their rough and tumble approach to the news, but they pale in comparison to newspapers in countries like Turkey, where the the Orwellian term ‘hate speech’ has real meaning. If we hope to preserve the relative freedom of the British press from the vultures of supposedly benign regulation, we would do better to stand against its degeneration into a vehicle of hatred, rather than trying to change the subject on their dime.

27 Responses to “‘The new fascists’: Brendan O’Neill trolls the nation in the Daily Mail”