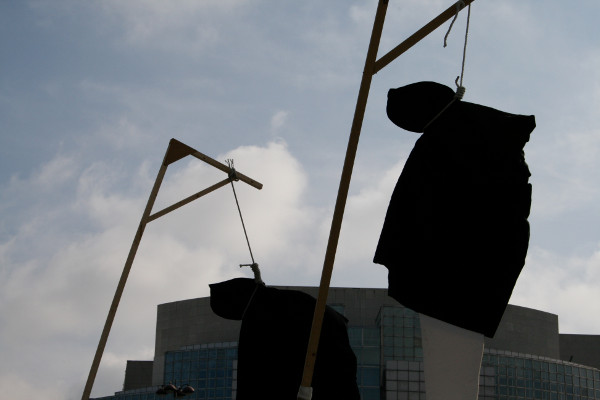 Among the new human rights concerns that have occurred as a result of this new Conservative government, such as the threats to scrap the Human Rights Act and the refugee crisis, you would be forgiven if you had not heard about how UK foreign aid and assistance money is being used to fund executions in Iran and Pakistan.

Human rights organisation Reprieve has documented the catastrophic impact of money sent by the UK government to Iran and Pakistan in the name of the ‘war on drugs’. Over a two-year investigation Reprieve found that the £45m worth of aid to these countries, given by European governments, has led to over 3,000 executions in Iran and 112 death sentences in Pakistan.

The UK is by far the largest donor in Europe (providing just over 50 per cent of the contribution to the counter-narcotics aid in the region). UK taxpayers may therefore not be aware that their money is being used by these countries, under the guise of fighting drug supply, to execute their citizens. Instead of targeting the masterminds of the global drugs trade, this policy can be used to facilitate arrests and executions of the most vulnerable and abused people.

Consider the case of Khadijah Shah, from Birmingham, who is currently being held in custody in Pakistan because she was asked to carry bags on her way back from Pakistan after a trip to the country. She was heavily pregnant when she was arrested in 2012 and was only allowed to leave for one day to give birth while she was incarcerated. The baby and her other two young children were incarcerated with her. The older children were allowed to return to the UK after four and a half months but Khadijah, and her baby, remain in jail on a life sentence.

Khadijah’s case shows that the current system succeeds only in locking up ‘mules’ who are knowingly or unknowingly carrying drugs, while letting off those who make the big money from the narcotics trade. Indeed, UK-funded programmes are so hopelessly skewed that UN evaluators inspecting these initiatives recently observed ‘an indication of increased [drug] trafficking’ in Pakistan and a lack of ‘tangible outcomes’ with respect to the overall drugs trade.

This is a very important issue because as a country we are, rightly, fundamentally opposed to the death penalty and our aid money should not be going towards any programmes which enable or encourage it. It is therefore up to Labour to put pressure on the government to understand how this has been allowed to happen, and to consider shifting the focus of drug policy on the demand-side (for example, better rehabilitation centres) rather than the supply-side of the trade.

In August of this year an unprecedented coalition of 37 public figures – including Sir Richard Branson and former Director of Public Prosecutions Lord Ken Macdonald – called for the Labour chair of the Home Affairs committee to launch an enquiry into the Home Office’s financial and operational support for overseas drug operations. After the Guardian reported on this the Committee’s chair admitted he had received more than 3,000 emails from members of the public backing the call for an inquiry.

In order to ensure that taxpayers’ money is not fuelling executions worldwide it is absolutely vital that the UK’s overseas drug programmes receive some degree of public and parliamentary scrutiny. Despite all the evidence that these programmes lead to grave human rights abuses, the home secretary has repeatedly refused to disclose any information about their funding or management – meaning their evident failings are hidden from public view.

If you wish to help Reprieve’s campaign, please write to your MP about this issue, asking them to contact the chair of the Home Affairs Committee and back the call for a full inquiry. You can find out more about UK aid for executions on Reprieve’s website and you can read their two-year report on the issue here.