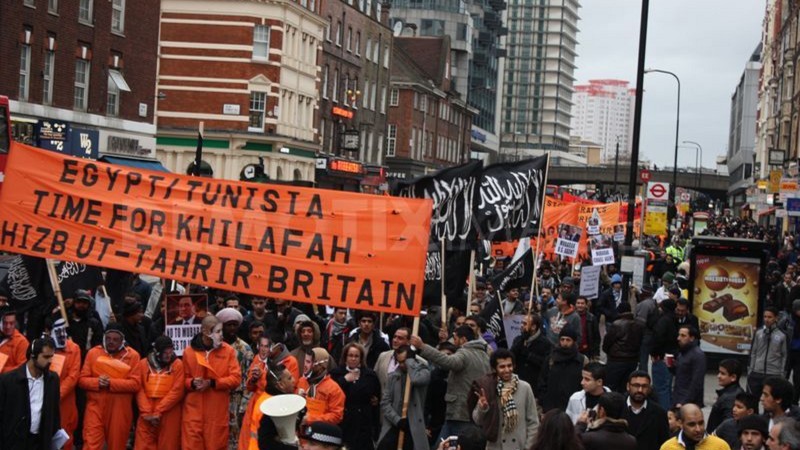 On Friday the Guardian published a lengthy interview by Peter Oborne with Abdul Wahid, a leading British member of the Islamist organisation Hizb ut-Tahrir.

The two men appear to be quite friendly. “I have known Wahid for around a decade”, Oborne reveals, and the pair “have dinner occasionally.”

The interview seems to have been a congenial affair, in which Oborne gave Wahid the opportunity to rebut some of the accusations made against HT. At the end, Oborne concludes:

“You can say many things about Wahid, and be appalled by much of what he says. But in a democracy he surely has the right to say it. Whatever the government thinks.”

Part of their interview was about antisemitism, and it reveals many of the double standards, and much of the moral blindness that characterises this kind of apologetics for Islamism.

Oborne refers to a leaflet published by Hizb ut-Tahrir in 1999 called The Muslim Ummah will never submit to the Jews. Oborne writes: “It contained unpleasant language, some of which I read out to Wahid, and invite him to denounce the article. He refuses.”

It is worth reciting some of this ‘unpleasant language’:

“In origin, no one likes the Jews except the Jews… The American people do not like the Jews nor do the Europeans, because the Jews by their very nature do not like anyone else. Rather they look at other people as wild animals which have to be tamed to serve them… The Jews are cowards, they are a people of money and not a people of fighting… Know that the Jews and their usurping state in Palestine will, by the Help and Mercy of Allah (swt), be destroyed ‘..until the stones and trees will say: O Muslim, O Slave of Allah. Here is a Jew behind me so come and kill him’.”

Wahid twice declines Oborne’s invitation to denounce the leaflet. It was written out of the anger of the Middle Eastern conflict, he explains, saying that HT is ‘anti-Zionist’ but not antisemitic.

Wahid’s claim is laughable. The leaflet is rife with classical antisemitic imagery about Jews, including Jews in America and Europe. Nor is it a one-off. This HT press release from 2010 is even worse, using what can only be described as genocidal language about Jews:

“O Muslim Armies! Teach the Jews a lesson after which they will need no further lessons. March forth to fight them, eradicate their entity and purify the earth of their filth”.

You would have to travel to the farthest fringes of British neo-Nazism to find comparable language about Jews from the white far right. It is doubtful that a swastika-bearing skinhead talking about killing Jews or calling on followers to ‘purify the earth of Jewish filth’ would be a regular dinner companion for Peter Oborne, or the subject of a friendly interview in the Guardian.

Instead, we are treated to the usual evasions: that this is anti-Zionist, it is about Israel, it is a response to the conflict, and so on. It seems that Wahid regards ‘only’ calling for the genocide of the Jewish citizens of the Israeli state as somehow a reasonable position to hold.

Then, there is where this genocidal antisemitism fits with Hizb ut Tahrir’s broader worldview. This is something else that Oborne really should have noticed within the same antisemitic leaflet: the way that its goals echo Islamic State’s own supremacist and violent propaganda:

“O Muslims! Your foremost issue, the vital issue is the issue of Islam: through bringing back the Khilafah and applying the Law of Allah (swt) and uniting the Muslims under the flag of one Khaleefah, and carrying Islam, to the world through da’wah and Jihad in order to make the Islamic state the leading nation in the world, and to make the Islamic Ummah the best Ummah brought forth for mankind…

“In the forthcoming days the Muslims will conquer Rome and the dominion of the Ummah of Muhammad (peace and blessings be upon him and his family) will reach the whole world and the rule of the Muslims will reach as far as the day and night. And the Deen of Muhammad (saw) will prevail over all other ways of life including Western Capitalism and the culture of Western Liberalism”.

To repeat, this comes from the HT leaflet, not from Islamic State: and whilst HT is not itself conducting beheadings, it is easy to understand how its activities have helped create today’s environment in which a small but significant number of British Muslims look at Islamic State and think that it is the real deal.

In this context, HT’s antisemitism is about much more than ‘unpleasant language’. Perhaps Oborne is right that their views should be heard nonetheless: but Wahid’s refusal to denounce such vile antisemitic propaganda should tell Oborne, and the Guardian, something about the wisdom of having given him such a platform.

23 Responses to “Why is the Guardian giving a platform to Hizb ut-Tahrir?”