Some papers sympathise with the victims, while others swim in the sewer of nativism 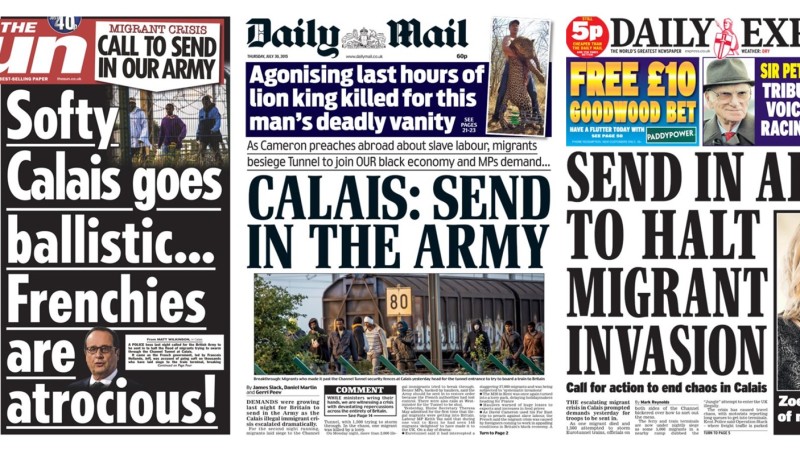 As politicians compete to find the most callous and militarised response to the Calais ‘migrant crisis’, a division has opened up among the Tory commentariat.

Finally, after some excellent reporting by several papers, columns sympathising with the victims of war abroad – rather than put out British tourists – have been published in the Tory press.

The Times has a thoughtful and stirring piece by David Aaronovitch looking at the real causes of the crisis, (dictatorship and war), which handily shames much of the press coverage of recent migration. Read it all here (£).

The Telegraph’s Emma Barnett (no relation) mocks emphasis on the supposed plight of British tourists stuck on motorways over ‘hundreds of displaced people from all over the world [who] live in some of the most wretched conditions’. She concludes:

“An island nation we might be, but that doesn’t have to mean our mentality must follow suit.”

The Daily Express and the Daily Mail, by contrast, chose to blame ‘the French’ for being too lax, and demand that soldiers in Europe be used to pacify refugees who have fled soldiers in the Middle East and Africa.

The worst of the bunch is probably the Sun.

Along with blaming ‘Frenchies’ (which century is this?), and running a two-page story headlined ‘Farce-holes’ against a picture of migrants tearing through fences, the paper’s main comment piece belongs in the archives, alongside Katie ‘let them drown’ Hopkins’s infamous ‘cockroaches’ screed.

Veteran noise-maker Rod Liddle, who was a troll before there were trolls, has decided to restate and extend the ‘what a rubbish holiday’ model, in a piece headlined:

‘Go on holiday to France? You’d be better off in Syria’.

Liddle doesn’t even attempt to justify this proposal, I suspect because he has little interest in what’s happening in Syria. Instead we are treated to sentences like this, describing the sort of holiday you can expect in France:

“…when you reach your home and empty out the car, you find Mohammed, Tariq and Abdullah from Somalia hiding in the kids’ lunchboxes.”

As against Aaronovitch’s solid internationalism, Liddle’s analysis is proudly nativist:

Deport the immigrants. Send them back to the countries they came from. Stop whining about not having enough help.”

What if they face torture, death or persecution in ‘the countries they came from’? The thought seems never to cross Liddle’s mind. Or perhaps it does, and he simply thinks, ‘Not my problem’.

Express complains about bilingual children, as language stands in for race