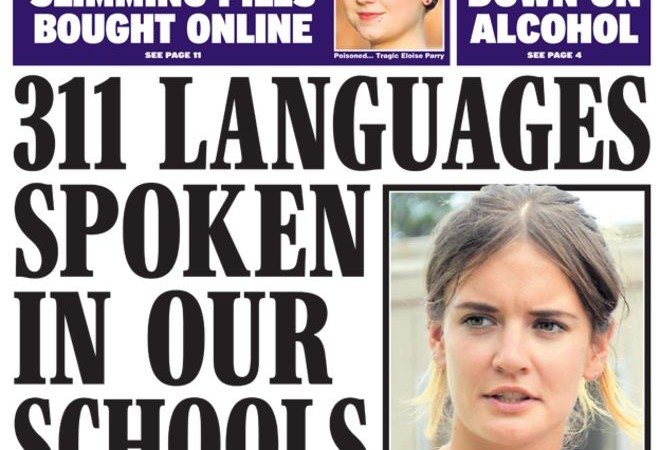 311 LANGUAGES SPOKEN IN OUR SCHOOLS

Classrooms where English is starting to die out

“A decades-long open door policy on immigration has led to English-speaking pupils becoming a minority in hundreds of classrooms.” 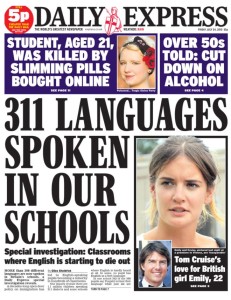 There are two main problems with the story, both closely related.

The first is to do with what is actually happening at UK schools, about which the Express misleads its readers. The second is the story’s surreptitious racism.

So what the Express is really complaining about is that a minority of children in Britain (but a majority in a handful of schools) can speak more than one language.

If the ‘first language’ (and how does one determine ‘first’ and ‘second’ anyway?) in question was French rather than Bengali, would the Express mind so much?

To explore these points further, here’s a quote in the story from the paper’s own columnist, former Tory MP Anne Widdecombe:

In point of fact, schools in Britain are required to teach in English. There is no evidence in the story of this not being the case in any schools. Instead the story uses phrases like ‘Punjabi is spoken’ in a way that could imply lessons are being conducted in Punjabi, with British kids unable to understand.

This implication or suggestion could certainly be picked up by readers – it worked well enough on Anne Widdecombe.

The vast majority of pupils in UK schools were born in this country. So phrases like ‘when they arrive here’ give the game away.

Read the first line of the story again: ‘A decades-long open door policy on immigration has led to English-speaking pupils becoming a minority in hundreds of classrooms.’

It’s quite clear that the use of ‘English-speaking’ here stands in for ‘properly British’, ‘or ‘not foreign’.

The Express is using language as a surrogate for race.

Playing on the anxieties of readers and promoting fear about ‘becoming a minority’ is racist demagogy, full stop.

To use children as fodder in this disgraceful way shames the Daily Express – or would if such a thing were possible.

13 Responses to “Express complains about bilingual children, as language stands in for race”