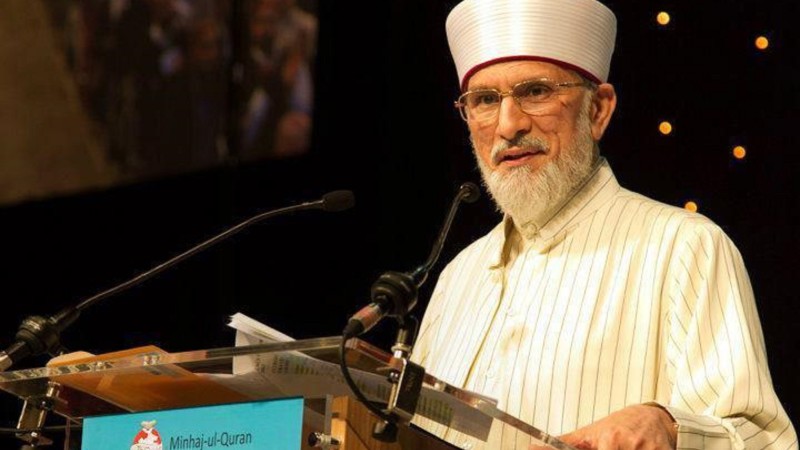 After the UK’s youngest suicide bomber, 17-year-old Talha Asmal blew himself up while waging the jihad of ‘Islamic State’ (IS), also known as ISIS, David Cameron urged Muslim communities to do more to fight Islamist terrorism.

The curriculum was launched in London on Tuesday.

The ‘Islamic Curriculum on Peace and Counter Terrorism’ was designed by a Pakistani cleric and politician, Dr Muhammad Tahir-ul-Qadri, renowned in the West for his edict against terrorism.

The curriculum itself addresses all the alarming parts of Islamic scriptures: the rules for setting up an ‘Islamic state’, armed Muslim rebellions, the doctrine of jihad, the violent verses in the Quran that promote killing and the authenticity of controversial hadiths.

However, the answer provided is one that we’ve heard on multiple platforms, in a plethora of instances, especially since 9/11: following the ‘real’ teachings of Islamic scriptures, the Quran and the hadiths.

While the rhetoric in the apparent counter-terrorism solution for British Muslims is self-defeating, the biggest question mark is over the man designing the curriculum himself.

In addition to promoting fascism through his politics in Pakistan, Qadri is renowned for giving contradictory statements with regards to the very laws and ideas that he’s presently challenging in London through the recently launched curriculum.

Just like his ‘Fatwa on Terrorism and Suicide Bombings’ claimed that  “Terrorism… has no place in Islamic teaching and no justification can be provided for it,” the MQI’s ‘Islamic Curriculum on Peace and Counter Terrorism’ condemns violent jihad, and antediluvian Islamic laws as being ‘un-Islamic’.

However, back home in Pakistan, Qadri proudly takes ownership of formulating Pakistan’s blasphemy law, which has been abused to suffocate and intimidate religious minorities through blatant mob violence.

When addressing western audiences, Qadri claims that the blasphemy law does not apply to non-Muslims. Back home in Pakistan he has advocated ‘killing blasphemers… like dogs’.

This video highlights his contradictory stance on the blasphemy law, and showcases his claim that he incorporated section 295-C to the Pakistan Penal Code which sanctions the death punishment for defiling Islamic scriptures or insulting Prophet Muhammad.

Qadri is renowned for saying whatever sells, whether it’s anti-government fascism through his politics and a bigoted version of Islam back home, or apologism in the garb of Islamic ‘moderation’ in the West.

With Islamist terrorism reverberating all over the world and over 700 British citizens having fled to fight along with ISIS, the need for reform among Muslims around the globe is evident.

However, ideological salesmen who change their ideas to suit the audience’s demands can never be reformists.

Reformers need to challenge the acceptable. In countries like Pakistan where bigotry is etched in the Constitution, reform would entail challenging the accepted existence of religious laws and propagating secularism.

In secular societies like the UK, where open debate on Islam (hopefully) can be held, reform would mean an honest reflection on Islamic scriptures and their role in fueling the propaganda that compels a University of Westminster graduate like ‘Jihadi John’ to leave his IT job and join ISIS.

The ‘Islamic Curriculum on Peace and Counter Terrorism’ can basically be summarised as the now ubiquitous apologia that ISIS ‘has nothing to do with Islam’, which is the laziest counter-terrorism argument that one can come up with.

To call it a reformist effort would be to reduce the long impending Islamic reformation to a couple of hours’ worth of Google search, during which one can find countless articles using ‘context’ and ‘misinterpretation’ to excommunicate Islamist terrorists.

Ironically this replicates radical Islamists’ favourite vocation: apostatising anyone with a different take on Islamic scriptures.

The reforms that we Muslims need is to accept that ISIS’ Islam is just as authentic a version of Islam as any other.

For literalism is another of the ‘multiple interpretations’ of Islam that we like to expound. Islamic reformation, thence, would mean revisiting our approach to the infallibility of Islamic scriptures, without conjuring apologia for ‘true Islam’, and accepting the idea that a Muslim can unapologetically condemn Islamic doctrines.

Anyone who peddles the concept of ‘true Islam’ – just like any other religion – no matter how peaceful and tolerant their version of Islam might be, inadvertently gives credence to the likes of ISIS.

For if there is a ‘true’ version, what’s stopping the radicals from believing that theirs is the one?

The monopoly of truth of any version of Islam needs to be replaced with the spread of plurality in Islam and the Muslim world, and accepting humanist, sceptic and revisionist Muslim identities, with varying stance on scriptural adherence.

Instead of excommunicating the radicals, and scrutinising the legitimacy of their actions through religious scriptures, true reform would mean giving humanistic ideals preference over any and every interpretation of Islam.

This in turn would ensure that the only acceptable version of Islam would be the one that is pluralistic and tolerant anyway.

If one believes that ‘true Islam’ actually is peaceful, tolerant and endorses pluralism, then there’s no better way to propagate it than challenging the very idea itself.

Just like with other religious communities, reform among Muslims will be brought about only by scrutinising religious scriptures, not by shielding them from criticism.